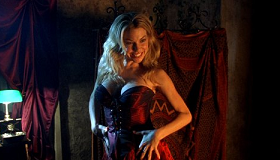 Full Circle Releasing must have a lot of faith that vampire fans will turn out to see absolutely anything. This is the only thing that could explain why they would release the truly awful Transylmania in theaters. This is the third in a series of movies limning a group of airhead college students' moronic high jinx. The first, National Lampoon Presents Dorm Daze earned all of $56,000 at the box office. National Lampoon's Dorm Daze 2: College @ Sea went straight to DVD. This latest entry in which the kids travel to Romania to study at a vampire-infested school should have gone directly into a trash compactor. As a bloodsucker spoof/college comedy, the movie is an utter failure. One fact about comedies that seems to have eluded the filmmakers is this: they are supposed to be funny. Transylmania is about as hilarious as nuclear winter. Unscreened beforehand for critics, it is doubtful the movie will make back what the distributor paid for prints and publicity.

This is what passes for a plot: The U.S. college kids converge on the Romanian college housed in a spooky old castle at the same time that vampire Radu (Oren Skoog) returns to reunite with his long lost love. As it turns out, Radu is a dead ringer for one of the Americans, Rusty, who also has romance problems with Dracuta (Irena A. Hoffman), a Romanian girl he met on the Internet who horrifies him when he meets her in the flesh. Stoner Pete ( Mad Men 's Patrick Cavanaugh) is torn between identical twins Lia (Natalie Garza) and Danni (Nicole Garza), while a situation involving the twins inspires Pete's equally high best bud, Wang (Paul H. Kim), to reconsider med school. There's more, including a couple coping with both bedroom problems and demonic possession and a pair of vampire hunters—one real, one fake—prowling around the campus. Gross-out gags, sex jokes and what passes for stoner humor abound.

Shot three years ago, Transylmania has been moldering on a shelf somewhere, but like cheap rotgut, bad films do not get better with age. This is one of the worst of the decade. Coming in the middle of the holiday season when all the good movies are supposed to be coming out, it is a perverse bit of counterprogramming and a toxic lump of cinematic coal.