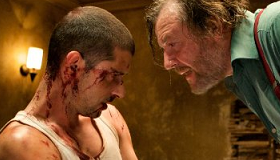 A heartbroken husband and his klatch of edgy friends kidnap his wife’s lover—to either get even or get her back—in this nasty little British chip fried up by the writers of Sexy Beast (Louis Mellis and David Scinto). Ray Winstone and Ian McShane were both in Sexy Beast and were both beastly and kinda sexy; here beastly is the best they can muster. Plus, there is a level of misogyny in 44 Inch Chest that suits the title too well. While not wholly unrealistic, it is so untenable as to put off all but the slightly sympathetic. Most ticket buyers will likely not be too put off, so numbers won’t be absolutely dire.

Fortunately, the events that setup the primary action of the film, during which Colin (Winstone) apparently beats the name of her lover (Melvil Poupaud) out of his wife Liz (Joanne Whalley), are not seen on screen. Given the way that these good-ole boys talk about women; what they do with them and think of them, not to mention how they refer to them across the arc of the film, we were delighted to have been denied that one brutal scene, at least. There are others, though not as many as the tone and claustrophobic conditions of the movie imply. Mostly 44 Inch Chest just feels and sounds brutal. Which is the result of its collective characterizations and the acting. Ian McShane’s Meredith is just about as vicious a psychopath as one is likely to ever meet; yet it’s his gayness that puts off the other boys. Stephen Dillane’s Mal (which means Bad in most languages and does here too) and John Hurt’s nasty Old Man Peanut, are equally objectionable. Only Tom Wilkinson’s Archie, Colin’s best friend, is rational, and only imperfectly sadistic, and he’s still not a good guy. Indeed, these men are not good. They’re men. And not just men, but manly men, as manly as men are capable of being: thus, the title.

If there is one notion in 44 Inch Chest that implies that brutality and misogyny are not the only products men are capable of it’s this; the only thing preventing Colin from having his blood thirsty crew do what they want to do to Loverboy is the idea that by letting him live, Liz might come back to him. This is intended to humanize, even redeem—it doesn’t.