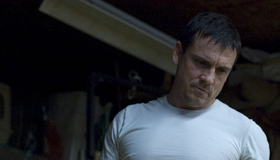 7 Days is a brutal, passionate and precisely drawn refutation of a standard-issue cinematic revenge picture, containing harrowing and visceral scenes of violence side-by-side with delicate moments of recognizable humanity. It’s tough stuff and that may limit this French Canadian film’s appeal to the arthouse crowd that is its natural audience base. But those who can stomach the unflinching aspects of this picture will be rewarded for their efforts.

The film begins in a lush Canadian suburb, where an upscale couple kisses their pretty, pre-pubescent daughter goodbye and sends her off on the brief walk to her nearby elementary school. Within seven hours, their daughter is dead and life as they’ve known it has been permanently destroyed. Within four days the police have arrested a suspect and used DNA evidence to prove he’s the rapist/murderer. The clock of the title starts ticking only when aggrieved father, Dr. Hamel (Claude Legault), takes the law into his own hands, kidnapping the killer and carrying him off to a remote surgical chamber of horrors, where he intends to torture and slaughter the man, as a celebration of his dead daughter’s birthday.

U.S. viewers in particular will think they know where this movie is headed and be proven wrong at nearly every turn. The violence Hamel inflicts on the murderer is almost unbearably vivid, partaking of none of the smug triumphalism of a movie like Ron Howard’s 1996 hit Ransom. In 7 Days, the accent is remorselessly on the dehumanizing impact of violence on the perpetrator, with even the secondary characters (including a police inspector played by Rémy Girard who is still recovering from the killing of his wife in a stick-up) arranged around this central thesis like a latter day Greek chorus.

Director Daniel Grou (aka Podz) and screenwriter Patrick Senécal meticulously keep the viewer’s vigilante bloodlust from finding a safe haven within their movie, making 7 Days a heartfelt corrective to the pernicious use of retributive violence in films of our time. Tough as it is to watch, this harrowing, uncomfortable but riveting movie more than deserves to be seen.