close
Its Va-Va-Voom lead trio aside, this one fails the grindhouse grade 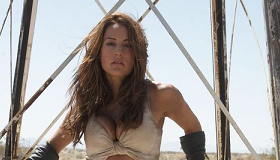 Three women—Hel (Erin Cummings), the owner of sex toy company; Trixie (Julia Voth) a stripper with a heart of gold and a tight dress to match; and Camero (America Olivo), a man-hating psycho criminal—arrive in the desert to recover $200 million in stolen diamonds. There's also a mysterious cylinder that can destroy life on earth. Before this trio of wild angels can complete their caper, the crime lord who owns the diamonds, his Japanese assassin with a razor yo-yo and a flood of double-crosses get in their way.

100 episodes of genre television including cult favorites Xena: Warrior Princess and Hercules: The Legendary Journeys make up the majority of Rick Jacobson's body of work, although he also has a number of B-features to his credit: Strategic Command ('97), A Bold Affair ('98) Black Thunder ('98) and Bad Guys ('08).
Jacobson co-wrote and co-produced Bitch Slap with his Xena and Hercules creative partner Eric Gruendemann and the resulting film is strong on Xena-like comedy but surprisingly sloppy with its action scenes.

Of the three sexy anti-heroines, it's America Olivo who delivers the best laughs as the crazy Camero. Olivo is also the film's version of Faster Pussycat! Kill! Kill! femme fatale, Tura Satana. Camero is the most blatant man hater in the bunch. Still, no one will confuse any of the Bitch Slap trio's performances with the work of Sigourney Weaver in Alien. Comedy clearly takes precedent over action in the very silly Bitch Slap.

To Jacobson's credit, I think the late Russ Myer, creator of Faster Pussycat! Kill! Kill! and other sexploitation features, would approve of his busty leading ladies. One thing Meyer would never have done is install a complicated back-story told via reverse flashbacks (think Memento) that only adds clutter to the movie.

Although missing B-movie kingpin Bruce Campbell, Bitch Slap can claim cameos from Hercules' Kevin Sorbo and Xena's Lucy Lawless. Still, poor word of mouth and a competitive specialty marketplace will eliminate any chance at crossover business similar to the 2004 genre hit Bubba Ho-Tep or any of Tarantino's recent genre releases. Freestyle Releasing, which picked up Bitch Slap after its screenings at the 2009 Toronto Film Festival, can expect grosses slightly below the recent blaxploitation homage Black Dynamite.

Still, Jacobson is reportedly at work on a second Bitch Slap film as part of a planned trilogy, which means he has another shot at making a movie worthy of the Faster Pussycat! comparisons.