close
A fine (and failed) romance 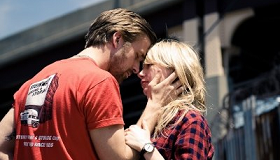 Blue Valentine is the kind of grim, character-based movie that needs a strong performer to anchor it. Director Derek Cianfrance has been fortunate enough to land two: Michelle Williams and Ryan Gosling. While this portrait of a shipwrecked marriage is both despairing and perhaps a bit slighter than it thinks it is, there isn’t a false moment in it. Though it’s hard to see the film finding much of a mainstream audience, as part of the impressive bodies of work both Williams and Gosling are compiling, it’s a film that will surely stand tall.

Essentially, Blue Valentine is a blue collar Scenes from a Marriage, where we meet a pair of good but poorly matched people living out the last stages of a bad personal choice. Cindy (Williams) is a medical aide who once dreamed of being a doctor, but settled for a certificate rather than a pedigree. Her marriage is a big part of why—her working class husband, Dean (Gosling), is content to be a housepainter and family man. A child himself, Dean is great with the couple’s young daughter, but we can see from the first scene the depth of Cindy and Dean’s unsuitability for each other—how did they think they could love each other for a lifetime?

Cianfrance then shows us scenes of courtship and flirtation filled with buoyancy and charm, intercut with a series of events steering the couple closer and closer to their breaking point. A drunken hotel getaway where Cindy bitterly rejects her husband’s advances is almost too emotionally bruising to watch, while the couple’s first date where Dean croons “You Always Hurt the One You Love” on ukulele while Cindy improvises an uncertain tap dance bursts with affirmation and life.

Like a Cassavetes movie, Blue Valentine doesn’t so much present a plot as a riff inventively around an emotional predicament. These issues confront millions of lives, though movies in their relentless celebration of “true love” rarely look at the emotional possibilities in such downbeat situations. Thanks to Williams and Gosling, Blue Valentine navigates these deep and chilly waters with an unflinching eye. It’s no date movie, but it will provoke debate and discussion, and it lingers in the mind far longer than a more typical approach to romance.