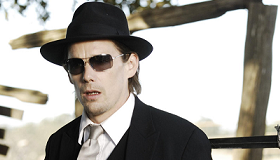 It's been a long seven years since filmmaker brothers Michael and Peter Spierig wowed horror fans with their micro-budget zombie thriller, Undead. Thankfully, their sophomore horror Daybreakers, a clever twist on the vampire legend, delivers what genre fans crave and more. Set in a near future where vampires rule the world and hunt the remaining humans for blood, Daybreakers pairs winged monsters and explosive gore with car chases and automatic weapons. The Spierigs make exciting use of their clever vampire premise and the result is a potential horror/action franchise equal to Underworld.

Set in 2019, a plague has transformed most of the world's population into vampires who continue to live and work in a society transformed to meet their needs. New cars have shaded windows so vampires can drive in the daytime—using computer steering systems, no less—without being burnt by the sun. Coffee kiosks now sell blood. But secrets are hidden in the upper floors of a corporate glass tower. Blood supply is almost gone and when these upstanding vampires starve for blood they turn into winged beasts. Ethan Hawke is Edward Dalton, a vampire researcher (sharing the same first name as a certain Twilight character) intent on finding a blood replacement and saving the human race. Sam Neill is the ruthless head of the corporation that employs Edward. Willem Dafoe is Elvis, a crossbow-shooting vampire hunter who shares with Edward his shocking secret that may topple the powerful vampire community.

Hawke is believable as a vampire with a conscience; one who refuses to feed on human blood. It's a grounded, somewhat serious performance, perfect for accepting the Spierigs' comic book plot. Sam Neill is wonderfully evil as the vampire CEO, intent on protecting his immortality. Willem Dafoe, fresh from his grueling performance in the arthouse horror Antichrist, delivers welcome laughs as the down-home vampire slayer, a good old boy version of Van Helsing.

The Spierigs have only two features to their credit with Daybreakers but they show a gift for audience-pleasing horror movies. In Undead, which enjoyed a very limited release, mayhem is played for laughs. In Daybreakers the Spierigs partner mayhem with gunfire, car chases and non-stop action.

The German-born, Australia-based brothers also have the technical skills necessary for a large special-effects-laden production. Daybreakers is slick by comparison to Undead, which had low-budget effects and crude make-up. The Spierigs, along with cameraman Ben Nott, makeup artist Steve Boyle and costume designer George Little, are up to the task of a higher scale production.

Eerie effect work include a massive storage facility that holds the human bodies being drained of blood and the monstrous winged beasts that are the result of vampires starved of blood. Subtle social commentary about class, race and blood as a metaphor for the oil crisis also gives the story a welcome satirical spin.

It's worth noting that the brothers insisted they never heard of Twilight when they made Daybreakers, but their movie will benefit from the current vampire craze. Borrowing a formula from the Sony franchise Underworld, the combination of action, gore and vampires makes Daybreakers a likely 2010 hit for Lionsgate. The movie is perfectly set up for a sequel, which proves the Spierigs already understand the business of movies after just two features.