close
A less than stellar sequel 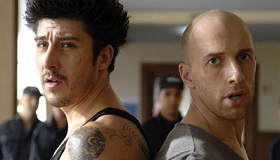 With an intended American remake of the original 2004 French-language District B13 apparently languishing in development hell, Gallic auteur-mogul Luc Besson has delivered a safe but serviceable sequel in District B13: Ultimatum, in the process giving a boost to the career of up-and-coming director Patrick Alessandrin. Though it fails to live up to its dynamic predecessor in almost every way, District B13: Ultimatumshould still be enough to satisfy the earlier film’s small but faithful core of American fans.

The original District B13, of course, had the advantage of an exceedingly talented director in Pierre Morel—who would go on to even broader success with 2008’s Taken—and an almost prophetic near-future vision of the simmering tensions that would explode in the Parisian ghettos just one year later. Its vision of an Escape From New York-style, walled-off suburban war zone, however, ended on a note of optimism that such might not become a reality—at least not in the then-future year of 2010. Since that time, the ascendance to the French presidency of the man previously responsible for crushing the 2005 protests—Nicolas Sarkozy—has given Besson and company a suitable launching point for a sequel which, three years later, blames a change in government for failing to tear down the wall that allows the autonomous, gang-controlled war zones to thrive on the outskirts of an otherwise civilized Paris.

Even still, ex-thug Leïto (David Belle) and daredevil cop Damien Tomaso (Cyril Raffaelli) haven’t given up on their efforts. While Leïto operates guerilla-style from within District 13, Tomaso continues to fight the good fight against criminal and gang kingpins from the outside. But a rogue government intelligence agency has other plans, orchestrating a corrupt plot to fan the flames of tension that will force the French president (Philippe Torreton) to pursue a devastating paramilitary solution to the ghettos. When they attempt to get Tomaso out of their way with a narcotics frame-up, they fail to account for his ol’ pal Leïto who promptly breaks him out, enabling the dynamic duo to once again wreak their marvelous, magical brand of havoc.

With all due respect to Besson and his collaborators past and present, Belle and Raffaelli are the only reasons to watch either this film or its predecessor. Experts in the urban obstacle-course sport of Parkour—with Raffaelli’s martial arts expertise an added bonus—they represent a dazzling throwback to the days of the Hong Kong New Wave when the likes of Jackie Chan pioneered a bone-crushing, back-breaking approach to real stunt work that captured the attention of the world. As with most of his French-language (and English-language) genre efforts, Besson’s script is an amalgam of clichés and genre staples—several notches below that of the previous film—though skeletal enough to give Belle and Raffaelli ample opportunities to strut their stuff. Raffaelli deserves most of the credit here—he oversaw, staged and choreographed almost all of the hand-to-hand material—which helps Alessandrin’s work on the more generic material look less lackluster by comparison. Nonetheless, Alessandrin is clearly no Morel, and with a considerably less interesting script on the second go-around (it takes Leïto and Tomaso more than half the film just to reunite) there’s a feeling that he, Besson and their collaborators are, more often than not, just going through the motions. That’s not to say the film isn’t fun or sporadically interesting—but it definitely makes the prospect of a third installment far less likely.