close
Watching this two mommy family is a drag 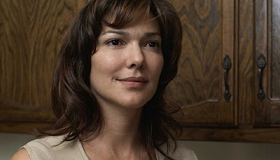 Part Little Miss Sunshine, part Thelma and Louise, all bad, Drool is an unpersuasive, amateurishly told story of an abused wife escaping her old (straight) life and embarking on a new (lesbian) life. For reasons unjustified considering the film that resulted from it, director Nancy Kissam’s script won the 2006 Slamdance screenplay competition. Had it been realized by someone with much more experience it might have had a shot. But visually and thematically this is filmmaking at its most overburdened and unsubtle with hardly any believable moments. The sexual content is intermittent and chaste, which at least shows Kissam’s emphasis is on character and storytelling (either that or her actresses refused to get busy together). The problem is neither the characters nor the storytelling are very good. The LGBT community, who’ll most likely discover the film on DVD and cable, might be motivated enough to recoup Drool’s meager budget.

Everything else aside, give Kissam credit for ambition. Built into Drool are some big ideas. But she must be prepared to convey spousal abuse, homicide and child molestation in a style that is confident and fully her own, even if that style is satirical. Yet there’s little on display here to prove she has those tools and, at its heart, Drool still falls into that overused LGBT category of straight-person-discovering-their-latent-homosexuality-when-a-gay-stranger-blows-into-town. But if anyone needs a new direction in life, it’s Anora (Laura Harring, looking perpetually stoned). A sad sack Oklahoma housewife, Anora is mother to slutty daughter Tabitha (Ashley Duggan Smith) and son Little Pete (Christopher Newhouse). Anora’s misery is the work of her racist, abusive husband, Cheb (Oded Fehr). Lording over the dinner table, his family bracing for his next explosion, Cheb is a typical, domestic-abuse monster that the experienced Fehr can never make real. And later, Cheb is given a ridiculous justification of sorts for his behavior, more evidence that Kissam does nothing small in her full-length directing debut. Every character and emotion is broad and sledgehammer soft, attributes of gay-themed cinema that are typical and tiresome.

As befitting tradition, someone of the same sex needs to sweep Anora off her feet and make her brightly colored daydreams come true. Here it’s Imogene (energetic Jill Marie Jones), a sassy, African-American cosmetics saleswoman. Positive, fun and sensing that Anora needs cheering up, Imogene befriends her neighbor with coffee and company, which drives Cheb into a racist rage. The ensuing tussle sends Anora, Imogene, Tabitha and Little Pete speeding away in Imogene’s purple car, dead body nestled in its trunk. In a film like this, no one is asking for car chases and courtroom showdowns. But at least give us some sense of urgency, some inkling that the group is running away from serious trouble or feels threatened by the consequences of their actions. Instead, their first stop is a park, where Imogene enjoys the swing and Little Pete salvages a broken doll from a dirty pond, piecing it back together as a symbol of a childhood reconstituting itself.

In the last few years, there has emerged a quintessential Sundance film. These are quaint, ticklish stories of families who remain oh-so-lovable despite their dysfunctions. Think Little Miss Sunshine. Think Sunshine Cleaning. Drool is trying, way too hard as it turns out, to be the Slamdance version of the quirky Sundance indie. But the film has taken on so many heavy topics without establishing a strong, appropriate tone that when the group stops by the side of the road to bury and eulogize a dead squirrel, you wonder who’s deciding the screenplay winners at Slamdance. And for much of their road trip, Anora and Imogene’s budding relationship is paid no attention. We don’t know what Imogene sees in such a pitiful woman. And it’s unclear why Anora wouldn’t just find a better man instead of switching teams, or if she feels any confusion or angst about her newly emerging sexuality.

Eventually, the foursome end up at the home of the woman who runs Imogene’s cosmetics company. It’s here, over lobsters and laughter, that a two-mommy family begins to take shape. It’s also here that Kissam proves she has a long way to go before she can properly construct a scene. When Tabitha catches her mother and Imogene in full lesbian lip lock, she just paces back and forth arbitrarily as a completely inappropriate guitar cue blows the mood. It’s one of the movie’s bigger moments and it’s completely off. Much of the emotional content is off, which might explain Tabitha’s voice-over narration (surely added in post-production to fill in character blanks). But too many of those blanks remain. Indeed, it’s still a mystery why so many films targeted strictly at a gay audience have to be this formulaic and below average in execution. There’s too much potential in this emotional space for expectations to be set so low and results to be this lame.