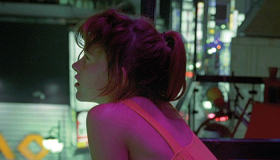 French bad boy filmmaker Gaspar Noé gets in touch with his spiritual side with Enter the Void, a visually extravagant snorefest about the transmigration of a drug dealer’s soul which appliqués the extraordinary visual syntax of Noé’s arthouse hit Irreversible onto a thin, repetitive and surprisingly predictable saga of death, transcendence, reincarnation and the dead-eyed decadence Noé sees whenever he looks at the modern world. Though Void arrived at Sundance with distribution already in place, it’s hard to imagine there will be much of an audience for such a grueling if intermittently sumptuous movie, especially since the graphic sex it contains is all joyless and mechanical, and there isn’t one character fleshed out enough to hold interest for more than a few fleeting moments of a very long running time.

In a sense Void marks a departure for Noé, whose similar long take aesthetic in Irreversible transformed the camera into the eye of a pitiless, omniscient and merciless god. Here, the same kind of virtuoso visual pyrotechnics instead roots the movie in a kind of hyper-subjectivity, with the audience chained to the consciousness of Oscar (Nathaniel Brown), an aimless twenty-something American in Tokyo drifting into addiction and drug dealing as a surrogate way of life. For the first half an hour or so, Void stays tethered to Oscar’s limited, existential view of reality so closely we even see his eye blinks every four seconds or so as well as his H. R. Geieger-ish hallucinations when he experiments with the notorious psychedelic drug DMT. Then, the Japanese police shoot Oscar down as he tries to dump a bag of pills down a public urinal and Noé’s subjective camera becomes as weightless as a restless ghost, drifting through a mélange of memories, post-mortem impressions of other lives and even fantasy sequences gleaned from Oscar’s loved ones as they dream.

Noé is a past master of delirious camerawork. Visually, Enter the Void frequently moves with the fluidity and grace of a semi-sentient helium balloon. But the technique (which ends nearly every scene with the camera lunging toward a circular or brightly illuminated object so Noé can chart the fallopian trajectory he’s mapped out for himself) gets tiresome before long, because technique is almost all this movie has to offer. Noé’s metaphysical ideas are simplistic at best, and so baldly announced in terrible expository dialogue during the first few scenes that the end of the movie is apparent from the moment Oscar drops to the floor and dies.

The characters (including Oscar’s trampy sister, the older woman he slept with and various down and out denizens of the drug demimonde he inhabits) are mere sketches that would be hard to care about even in a movie where the mise en scene didn’t willfully reduce them to pieces of décor. There’s a half-hearted attempt to build a relationship between Oscar and sister, Linda (Paz de la Heurta), the sibling he’s bound to by shared childhood trauma and incestuous lust, but Noé negates this by steering the poor girl straight into a Japanese brothel within days of her arrival in Japan, there to writhe, strip and fornicate with the same glassy robotic simulation of passion Noé defaults toward in all his sex scenes.

Despite an abundance of nudity, frequently spectacular visuals and a reported decision to trim Noé’s 156 minute “director’s cut” down to 137 minutes for US release, Enter the Void seems destined to do just that, at least in America, where audiences may want something more conventional in the way of a story to go with their visual excess. Enter the Void was never going to be another Avatar. It won’t be another Irreversible either.