close
An inspiring true story follows in the footsteps of a recent hit, but can it match it in ticket sales? 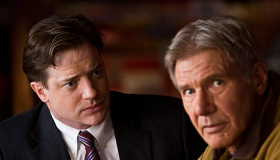 Like The Blind Side, this is an inspiring and compelling true story. Harrison Ford is at the top of his game in this remarkable film about one man’s impossible quest to pull off a medical miracle against all odds. Although this kind of mid-range drama has been a dicey proposition at the box office, initial foray into theatrical exhibition by CBS Films should rack up some decent numbers and then play exceptionally well on DVD and cable where it looks like it will be most at home. Ford and co-star Brendan Fraser’s names will help boost attendance for this worthwhile venture.

Many will point to Lorenzo’s Oil for a quick comparison but Extraordinary Measures finds its own groove by focusing most of its time on the business aspects of the drug industry and how bureaucracy and red tape stand in the way of progress. Extraordinary Measures is inspired by the story of businessman John Crowley (Fraser). A father who fought the establishment to find a cure for the fatal disease (Pompe Disease) afflicting two of his three children, Crowley later became a pawn for the pharmaceutical industry. He teams up with a brilliant, quirky and stubbornly independent research scientist, Dr. Robert Stonehill (Ford), who is convinced he has the answer but needs millions of dollars in order to prove it. Unfortunately his own personality issues get in the way, until he agrees to form a bio-tech company with Crowley in order to develop the life-saving drug needed. As they find initial success their company is sold to a large conglomerate that only complicates matters and puts the whole operation, as well as the lives of Crowley’s children, in jeopardy.

What sets Measures apart from the kind of movie-of-the-week CBS as a network used to make, is the fascinating road these two men embark on in order to defy the establishment in the corporate world of medicine.

Crowley has a knack for business and Stonehill is a medical genius, but they both lack the individual hubris to pull this off alone, so an uncomfortable and unlikely alliance becomes the film’s center of gravity and the key to making it credible. Like Blind Side or Erin Brockovich (from the same producing team), two similar true stories, it finds its heart in a sometimes heart-tugging but frustrating quest by two disparate people in search of a modern day miracle.

Ford, who also Executive Produced, finds comfort in a character that allows him to be offbeat, cranky and determined, despite the character’s apparent flaws. Ford’s perfectly matched by Fraser who has never been better as an almost too-good-to-be-true dad who gives up his promising career and sets out on a dangerous path to save his kids. Keri Russell turns in solid supporting work as Fraser’s wife and Jared Harris is also good as the corporate boss whose strong business sensibilities are tested in a very human way.

Measures was directed by Tom Vaughan, whose charming Starter For 10 was a critical darling if a low wage earner stateside, and tightly written by Robert Nelson Jacobs (Chocolat, The Water Horse) from Geeta Anand’s non-fiction best seller. It will probably fall well short of Blind Side-style business, but it should find an appreciative audience looking for a solidly well-crafted and engrossing drama.