close
Debut from TV star Josh Radnor has its moments, but more, please 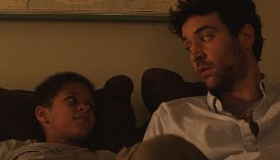 At Sundance 2010, buzz began swirling almost immediately around the small pleasures of actor-turned-filmmaker Josh Radnor’s happythankyoumoreplease, and it’s easy to see why. The script is intermittently literate and frequently funny, the young cast (headed by Radnor) is highly appealing, and you can definitely imagine this movie finding a niche with a subset of the audience that turned (500) Days of Summer into a sleeper hit last year. Two moments of romantic epiphany (involving secondary characters in Radnor’s interlocking ensemble) even achieve a rare pitch of emotional truth. So why does this New York-based, character-driven romantic comedy seem to evaporate as we watch it? How come a noble attempt at something deeper and more meaningful than the cookie-cutter rom coms we’re drowning in these days evokes smiles but not sustained laughter, and skims the surface rather than drawing blood?

Maybe the film’s protagonist, wannabe novelist Sam Wexler (Radnor), nails it when he worries if he isn’t too well-adjusted to be a major writer. Like Sam’s rejected novel, “The Other Great Thing about Vinyl,” HappyThankYou is an awfully well-meaning work, filled with decent people mostly behaving very well toward each other. In addition to Sam, who blows a big agency meeting to rescue and then take in a young black child lost on the subway, there’s Annie (Malin Akerman), a hairless altruist doing unspecified good works at a law firm; the loving couple (Pablo Schreiber and Zoe Kazan) facing up to adult decisions of marriage and career; and “Mississippi” (a radiant Kate Mara), bar girl, aspiring singer and Sam’s instant crush. Each of these creations talks about pain and mistakes, but nobody really hurts anyone or makes any; even when the commitment-phobic Sam alienates Mississippi by missing a gig he promised to attend, it’s because he’s been detained by cops not because he’s a momentary louse.

There’s a passing mention of Woody Allen in happythankyou, and he’s the obvious patron saint for what Radnor is trying for. But what makes the best of Allen’s work memorable isn’t only that the jokes are sharp, it’s also that Allen is a romantic pessimist who sees a kind of nobility in the human desire to reach for love across the abyss, against some pretty long odds. In other words, there’s real pain in Allen’s work, and it provides thematic complexity and dramatic tension. happythankyou is a promising debut from a writer/director who may only hit his stride after his heart gets broken another time or two.