close
A slight movie surrounds the next, possible, cult hero 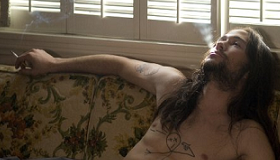 Joseph Gordon-Levitt dominates this slight, worth-a-watch dramedy about an anarchic headbanger who invades the home of a grieving widower, grandmother and son like a bear claiming a cave. With tattoos of a middle finger on his back and a dead stick figure on his chest, Gordon-Levitt's Hesher is raw destruction, and aggro comedy writer/director Spencer Susser even punctuates his one-liners with a blast of crunching metal. ("Ever been skull-f--ked?" DURNAdurnDURN! "Would you like to be?") He's a can't-miss attraction in a movie that goes nowhere, and with the odds high that the Sundance flick will get swooped up for an indie release, odds are he'll be a cult hero for a new generation, assuming badass audiences can get past all that killjoy plot about grief.

Young T.J. (Devin Brochu) meets Hesher when the boy shatters a window at his squat. Hours later, he spots him in a hallway at school smoking cigarettes with impunity. (Granted, this school might not be too sharp—no one seems to notice that T.J. looks four years younger than his classmates.) Hesher seems too bold to be true. Cruising around their small town in his battered black van, he's like an apparition from the gods of metal—we're waiting for the tyke to discover that he is Tyler Durden. But when Hesher stomps into T.J.'s living room, stripping down to his skivvies and settling in to watch porn, we realize T.J.'s depressed father (Rainn Wilson, unrecognizable) and elderly grandmother (Piper Laurie) can see him, too, and that Susser's script doesn't see the homeless metalhead as a allegory for grief, but as an actual character who needs a character arc.

The flick's third-act rush for a resolution softens its no-holds-barred attitude and the film ends on a lull. Brochu is a fine young actor, but the film’s bigger issue is Susser's sudden urge to satisfy those audiences who want a movie about headbanging to end in a group hug. The energy is drained by a forced love triangle between T.J., Hesher and a lonely grocery bagger (Natalie Portman). As always, Portman is grievously miscast—she and her agent would do well to emulate Gordon-Levitt, who continues his crusade to prove himself as the next great talent. In (500) Days of Summer, he was pert and idealistic with eyes as wide as a puppy. Here, he's about-faced to play a truly threatening grunt that keeps his eyes squinted half shut like a hungover frog. Gordon-Levitt stares at the world like a wolf prepared for attack—he's destructive even when it's not in his best interests, getting clobbered by a gas grill as he wrestles it into a stranger's pool. Hesher wreaks so much carnage that his major turning comes when he—gasp!—cleans up someone else's mess. You don't resent the movie that surrounds him, but you don't need it. Gordon-Levitt was born to rock and we salute him.