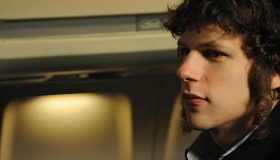 For a non-sectarian viewer unaware of the intricacies of Hasidic orthodoxy, director Kevin Asch’s Holy Rollers may take some getting used to. It’s worth the effort though, because this based-on-fact crime drama about Hasidic Jewish drug smugglers running Ecstasy pills from Amsterdam to Brooklyn in the late 1990s weaves a quiet, ethnographic spell, highlighted by a brave and detailed central performance from Jesse Eisenberg. A careful arthouse release could yield some gelt at the box office, especially in the vast Jewish ethnic enclave of New York where these events took place. But Holy Rollers is mostly a marker being put down by some talents to watch, especially Eisenberg, who is greater than fans of Zombieland could have imagined.

Holy Rollers illustrates why Eisenberg has been so quietly effective in comedies—because he acts his humor, calibrating it for normalcy. As Sam, a young Hasidim working in his father’s fabric shop, Eisenberg begins as a variation on his established persona—a likable naïf, albeit one surrounded by the arcana of an all-encompassing spiritual tradition. Sam’s chomping at the bit, and deeply intrigued by his more secularized neighbor, Yosef (Justin Bartha), who watches pornography by night and sports a Rolex watch by day. When Yosef leads Sam by increments toward the source of his illicit income, the naïf matures quickly, with personal and religious consequences for both Sam and his close-knit family.
Eisenberg’s central performance is both soulful and natural. We feel fully Sam’s quiet frustration, his yearning for more out of life and his grief over the yawning gulf that opens between himself and the traditions that still define him. Asch and screenwriter Antonio Macia could have provided Sam with a bit more debauched pleasure for his pains. Perhaps the Hasidim’s rejection of worldliness is so complete that Sam’s single Ecstasy experience and a stolen kiss with his boss’s girlfriend are equal to a series of wild erotic sprees, but it would have been interesting to see what Eisenberg did with more extreme situations, and deeper forms of decadence.

Director Asch has an easy, naturalistic and non-sensationalized way with scene construction that blunts the visual impact of the story at times, while keeping the focus on character rather than the criminal melodrama that might have emerged in other hands. Bartha’s Yosef is a marvel of economy, the sketch of a secondary tragedy in the margins of an already tragic tale.

Holy Rollers is the kind of cinematic surprise a young actor and a first time director ought to aspire to. Hopefully Asch will be given the opportunity to grow with his next project. Eisenberg’s growth has already taken place, inside this movie, and right before our eyes.