close
In this RomCom, even Sadie Hawkins is bound by convention 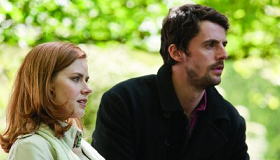 According to Irish custom, on Leap Day, which occurs once every four years, a woman is allowed to propose marriage to a man (in Ireland, this constitutes women’s rights). It’s a tradition that sets the worn-out plot of Leap Year in motion. But there’s another tradition being celebrated here, one that needs serious reconsideration. It’s the tradition that American studio romantic comedies must be artificial, assembly line driven and lacking surprise. Which is to say Leap Year is an American studio romantic comedy. What rankles most is not the film’s cookie cutter heroine, a pretty Boston control freak named Anna (Amy Adams) struggling to reach Dublin by February 29 to propose to her cardiologist boyfriend, Jeremy (Adam Scott). Nor is it the pre-ordained plot turns in which Anna braves (turbulent) planes, (missed) trains and (rusty) automobiles to reach Dublin, with the help of reluctant Irish escort Declan (Matthew Goode). It’s that the movie could have been a sweet, little Irish fairy tale had it not depended on the chemistry of its two leads and let everything else die from neglect. Forgettable all around, this still could grab some stray pennies as counterprogramming against the Avatar juggernaut, mostly with women who see Adams as their on-screen BFF, the embodiment of the modern, upscale, female careerist.

Nobody here brings their A-game, denying us the pleasure of what Adams and director Anand Tucker could create together. The two are a good fit. Tucker’s underappreciated character piece Shopgirl is exquisite and emotionally open, words that could also be used to describe the delicate, Oscar nominated Adams (Doubt). Tucker, working with cinematographer Newton Thomas Sigel, gives many of the interior scenes the color-bathed glow of a warm romantic fable for which Adams would have been perfect. But the road upon which Anna and Declan travel on their way to their romantic destiny is as old and well-trod as Deborah Kaplan and Harry Elfont’s stale Irish stew of a script. Instead of a tonal and story amalgam of Local Hero and It Happened One Night, we get a pile-up of tired moments that are the product of whomever did the Google search that revealed the leap day custom. And Anna’s character traits are so extreme that within moments, we can predict where her trajectory will take her. Anna’s job, high-toned and lucrative, is to add furnishings to vacant condos so they’re more enticing to prospective buyers. Tailoring her dresses in eighths of an inch and always sticking to schedule, Anna is finicky and entitled, yet meant to be a charming, uptown everywoman. Had she not been played by such an enchanting, homespun beauty, the character would have been downright unlikeable.

Too many recent romantic comedies center on a woman desperate to get married which, in 2010, should no longer represent the pinnacle of personal female achievement. But it does for Anna, who waits for Jeremy to pop the question while rehearsing her reactions to her boyfriend’s bended knee. During a fortuitous conversation with her father (John Lithgow in a rush-rush cameo), Anna learns she can take matrimonial matters into her own hands by surprising Jeremy at his cardiology conference in Dublin and proposing to him on January 29. And off she goes. When her flight to the Emerald Isle is diverted due to bad weather, she lands in Cardiff and eventually comes upon a pub owned by lanky, handsome Declan. If he can get her to Dublin within two days, he’ll get money to save his failing pub. If she makes it on time, she’ll get a husband. As the designated foil, Declan plays his part: he burps audibly, listens to rowdy music and fairly snickers at this prissy American creature.

Anna and Declan’s journey to inevitability takes place mostly outdoors, where every castle, home and winding road is set against gorgeous Irish mountains captured by Sigel in a clean and open style. But what is Tucker to do with Anna and Declan as they fumble around the countryside until the climax we’ve already predicted? They feel as phony as the characters in Shopgirl and Hilary and Jackie felt real. So when they’re forced to notice each other’s attractive bodies, forced to kiss at the dinner table and forced to sleep together in the same bed, it smacks of screenwriter puppeteering, not the actions of genuine, free-willed characters. And when the ragged, drenched pair escapes a hailstorm by stumbling into a wedding ceremony, then eating, drinking and dancing at the reception like invited guests, we’re officially on the road to Contrivance Town. Not even Adams, as winning as she is, can carry material this thin and obvious. As for Declan, he’s underwritten and too non-threatening which, in a broader sense, is the problem with Leap Year. There’s never anything at stake, never a fear that things won’t turn out exactly as convention stipulates. Anna will reinvent herself to please a man and the man will get to spend his life sleeping with a woman who looks like Amy Adams. It’s enough to drive you to drink. At an Irish pub. With Amy Adams. Who’ll propose to you. You should be so lucky.