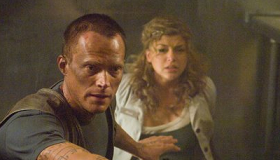 The End Of Days comes to a rural roadside diner where the Archangel Michael (Paul Bettany) comes to save the as-yet-unborn baby of a waitress named Charlie (Adrianne Palicki) while the very future of humanity hangs in the balance. Essentially a B-movie dressed up with A-level special effects, Legion looks spiffy but sounds bad with a lot of overwritten dialogue scenes and predictable action. Box office should be sweet until word of mouth spreads by End Of Weekend. A brighter future is assured in DVD bins.

In the film’s opening sequences we discover that God is fed up with Earth’s bad ways and decides to end it all. Michael however decides to go against conventional wisdom and defy God and the other Archangels by descending to Earth and heading toward a roadside diner where a pregnant waitress may be carrying the key to mankind’s survival. Before he arrives we already see the inhabitants of the diner are creeped out by a series of strange occurrences, including an insect invasion and the arrival of a seemingly nice old lady who suddenly starts spouting messages from the devil and goes ballistic, crawling on the ceiling after biting into one of the customers.

All hell breaks loose at the diner as an assortment of creepy people-turned-demons do the dirty work for Michael’s arch (Angel) rival, Gabriel (Kevin Durand), until the whole thing leads to rather obvious showdown between the two.

Debuting director Scott Stewart owns his own special effects house and clearly benefits from the cut-rate discounts he can provide himself. He’s on less solid footing as a screenwriter (with co-writer Peter Schink) as the film falls prey to zombie-like antics we’ve seen done better—a lot better.

Bettany is a terrific actor and acquits himself nicely even though some of the lines are howlers. It’s a tribute to his performance that you believe the ominous warnings he brings with him. Rest of the cast is fine with Dutton standing out among the diner set. Quaid must have done it for the paycheck.

Coming hot on the heels of last week’s The Book Of Eli, the spiritual aspects of Legion could appeal to bible belt moviegoers, especially with its apocalyptic overtones, but it’s likely they won’t be showing up in droves to this R-rated actioner.

At the very least Legion and another of the week’s new films, Tooth Fairy, could spark a new fashion trend for men: guys who sprout wings.