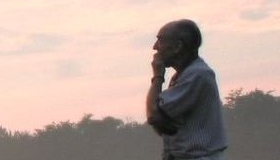 Loot is an intriguing documentary about Lance Larson, a former used car salesman turned treasure hunter, and his attempt to help two WWII veterans find the treasures they admit to “looting” from their theaters of war some 60-odd years earlier. Darrel Ross and Andrew Seventy fought in Germany and the Philippines, respectively, however, they’ve never met. As they near the end of their twilight years they each have fantastic stories about spoils of war that await recovery. While the treasures and events recounted by these old veterans are true, the loot recovered in director Darius Marder’s documentary is much more valuable than the items these two soldiers buried over six decades ago. What the film and the subjects actually find are the remnants of the past, including the lingering wounds of war that scar a young warriors heart and never really heal. Recovered revenues here will be sparse; recovered peace of mind—priceless.

Plainly the filmmakers set out to document Lance (an interesting figure in his own right), but Marder found a treasure or two when not tracing Lance as he sells used cars. Lance and his relationship with his son, Michael, loom large in the narrative and in some ways parallel the stories of Darrel and Andrew, our veterans. The other narrative thread involves the actual search for the treasures Darrel and Andrew literally buried and fully anticipated returning for someday. In Germany, 19 year old Darrel and his buddies effectively looted the valuables of retreating German soldiers near the end of the war. The now blind octogenarian recalls places and people as best as he can through the fog of war and the distance in time, though his story is not always consistent his conviction never wavers. Andrew’s story is darker still, his treasure includes an ancient Japanese sword he saw used to behead Japanese prisoners of war. The weight of these events are heavy in Andrew’s heart and reflect the simmering chaos of his living conditions, as well as a penchant for hoarding. One treasure Lance actually finds are thousands of dollars Andrew has squirreled away in his own home, for the most part he’d forgotten the money was there, even as he racked his memory for clues to the whereabouts of that sword and the spoils of his wartime experience.

Lance, Andrew and Darrel, along with the filmmakers, travel to the locations were the men left their loot, each half way around the world from the other. They do not find them. This is not a spoiler for the film, it’s obvious that no physical treasures will be found fairly early; nor does it dilute the power and poignancy of this documentary which is actually an exploration of memory and regret, and our relationship with ourselves and those who love us but may not really know us.

The loot here is much more valuable that the items buried, and their recovery once again—priceless.