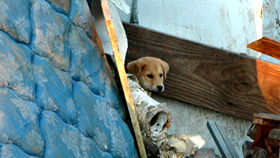 When Hurricane Katrina slammed into New Orleans in 2005, the cataclysm brought out the worst in the United States in an emergency response that was woefully inadequate. But it also brought out the best in the legions of rescue workers, charitable organizations and citizen volunteers who swooped in to do what they could to alleviate the suffering of people whose homes and lives had been destroyed. Geralyn Pezanoski's enraging, uplifting documentary Mine shines a light on what happened to New Orleans' animals in the aftermath of the storm, and as with seemingly every other aspect of the event, rescuing pets brought out both the bad and the good. With only a limited release planned, box office returns will be modest for this film, which will be a must-see for animal lovers and anyone with an interest in Katrina's still unfolding saga.

Given how unprepared all official bodies were for sheltering humans in wake of the hurricane, it is hardly surprising that there were no plans at all for what to do about New Orleans' pet populations. Rescue shelters, including the Superdome, would not take them. Neither would the National Guard when they rescued people from their homes. Pet owners could only leave food and water behind and hope for the best. Becoming aware of this situation, animal rescue organizations moved in to help. With not enough room to keep the rescued pets locally, the animals were spread across the country, many farmed out to individual homes for care. While some groups kept in mind they were fostering the animals and would have to return the pets if their owners came forward, others simply adopted the animals outright.
Pezanoski interviews many of the volunteers involved in the efforts to rescue New Orleans' animals, while focusing specifically on a handful of dog owners who became separated from their pets in the catastrophe. Whether a reunion is in the cards or not, what they have to go through to find their pets is appalling. Some volunteers never lose sight of the fact the people seeking their pets have lost everything and only really want to be reunited with a cherished member of the family. A volunteer of this sort is Canadian Sandra Bauer, who worked to reunite 86 year old, Creole widower Malvin Cavalier with his ball of fluff, Bandit. Meanwhile, not all volunteers or rescue groups think the same way. Some seem merely incompetent, but there are some who are actively hostile towards the hurricane's victims, accusing them of abandoning their animals. There are also those people who adopted Katrina dogs and have become so attached they don’t want to surrender them.

Racism and classism rear their ugly heads in some cases, but for the most part there are few real villains. One volunteer suggests that many of the rescuers are so animal focused that they have taken the humans who have suffered such loss completely out of the equation; it’s an apt assessment. Pezanoski reserves most of her empathy for the pet owners of New Orleans, but she lets all sides have a say. Her camera also charts the beginnings of the city's recovery from the disaster, as her subjects are not only trying to get their animals back, but are also putting their lives and homes back together.

People who love animals would do well to bring tissues and lots of them if they go to see Mine. The one thing all of the individual stories have in common is that no matter how well or how poorly the stories come out, they are overwhelming poignant. This one is a weepie and a reminded that while the hurricane moved on as quickly as it landed, its aftermath continues to linger.