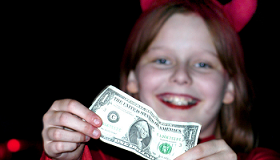 With the nation’s unemployment rate hovering around 10% and home foreclosure numbers stubbornly high, Michael Palmieri and Donal Mosher’s haunting documentary of multigenerational troubles is either a case of great timing or, possibly, the worst timing ever. Americans, after all, are beset with problems, which explains why the most popular holiday destination this winter has been the distant moon Pandora. But our current misfortunes are, in the final analysis, temporary. The Mosher family profiled in October Country, however, is trapped in a seemingly permanent cycle of bad decision-making that’s spanned years both boom and bust. While we may initially look down upon the Moshers as being so dysfunctional they deserve their own documentary, we soon realize they’re actually more typical then we’d care to admit. Despite these universal themes, this gloomy, slice-of-dysfunctional-life will earn more praise than cash, with high-end audiences and DVD renters its primary ticket out of poverty.

Mohawk Valley, NY is in northern Appalachia (a region practically synonymous with privation), site of numerous Revolutionary War battles and home to a Remington rifle factory that serves as one of the area’s biggest employers. It’s a hardscrabble world of rough beauty and limited dreams making for a tough existence. Four generations of the Moshers currently live in Mohawk Valley, their lives a revolving door of abusive boyfriends, drunken husbands and unfit mothers. The family is held together by grandma Dottie and her ex-military husband, Don. Dottie has a daughter named Donna, the survivor of numerous abusive relationships. Donna, who admits she should never have bore children, has two daughters. Her oldest, and the current standard bearer for the family’s poor decisions, is Daneal. Subsisting on food stamps and cash assistance, Daneal tends to her infant daughter, Ruby, with no help from the baby’s abusive, absentee father. A troubled child from the start, Daneal craved “the wrong kind of attention,” which she continues to seek despite being self-aware enough to wonder about her choices in life.

Co-director Donal Mosher is a member of the family, although this connection is not mentioned in the film or the press notes. It’s a curious omission, but the family would surely not have allowed a total stranger such access to their lives. And the tone may not have been so (appropriately) non-judgmental had someone without built-in sympathies been at the helm. It’s also Mosher’s photography and essay work that inspired the film and its despairing look. Beautifully shot (and well scored), the emphasis is on elegiac shot compositions and lingering close-ups that suggest the salt of the earth nature of this troubled clan. These are impressionistic visuals working as counterpoint to the Mosher’s guttural existence. The doc follows Dottie and company between two successive Halloweens. It’s a spot-on book-ending device. The Moshers are haunted by the ghosts of yesterday’s decisions, which became today’s ruinous choices. You want to yell at the screen when Daneal gets into an on-camera slap fight with her latest loser boyfriend or when Dottie continues to show support for her foster son, Chris, a teen punk well on his way to a short and meaningless life. But there’s hardly anything in their past, or their environment, to foster a change in attitude.

October Country is not just the story of cycles, but of how people cope by fooling themselves or finding ways to avoid painful realities. Don’s “useless” sister, Denise, is a self-described Wiccan and lover of unicorns, dragons and fairies, who sneaks around the local cemetery looking for ghosts. (Anything to escape from reality.) The film’s most crushing moment comes when Daneal is faced with the truth about her long-gone, convict dad, whom she’s inflated in her imagination. “Nineteen years of lies, why couldn’t you lie to me now?” Daneal tearfully says as her delusional concept of her father crashes down. The family’s best chance to reverse its sorry fortunes is Desi, the feisty, self-aware 11 year old sister of Daneal. Wise beyond her years (and a genius when measured against the other Mosher women), Desi already knows “I’m a lot smarter” when it comes to taste in men. Although, her ability to wiggle out from under the oppressive thumb of her forbearers has yet to be tested. Here’s hoping she can. Dark yet illuminating, specific yet universal, October Country is a voyeuristic film about a sad, hopeless family that never descends into a depressing wallow. It’s doesn’t evoke the queasiness of Capturing the Friedmans, nor is it a strictly socio-political document like Harlan County, USA. It is, instead, a chamber piece, a psychological horror film, about “young mothers, bad choices.”