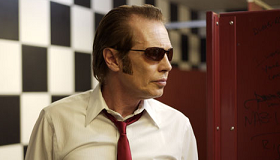 A southwestern flavored comedy about a compulsive gambler that runs away from Vegas in search of a normal life and bland new job, Saint John Of Las Vegas doesn’t break any new ground. In fact, it resembles any number of quirky indie character pieces. An amusing turn from Steve Buscemi in the title role and some sporadically funny, off-beat dialogue provided by debuting writer/director Hue Rhodes make for a passable, if forgettable, little time passer. Theatrical returns should be minimal with cable and DVD prospects the best chance for success down the line.

Buscemi is John, a terminal loser and addicted gambler who moves to Albuquerque to take a desk job at an auto insurance company. Trouble begins when his boss, Mr. Townsend (Peter Dinklage), asks John to join the company’s best fraud investigator, Virgil (Romany Malco), as they look into a questionable car accident just outside Vegas. It’s a good opportunity for John but it lures him back into the temptation zone from which he’s so trying to escape. Also occupying his time is a sweet flirtation with his co-worker, Jill (Sarah Silverman), which has the potential to put his personal life back in order as well.

Much of the film is spent on the road with John and Virgil as they encounter an assortment of broadly drawn, quirky characters including a nude man (Tim Blake Nelson), a handicapped stripper (Emmanuelle Chriqui), a loony park ranger (Jesse Garcia) and, in the most amusing encounter of all, a carnival human torch smartly played by John Cho. Complications and twists take the story in different directions as John asserts himself but realizes addictions are almost impossible to escape.

Rhodes is clearly interested in oddballs and populates his debut effort with an assortment of them, perhaps too many of them as the film gets bogged down and becomes more quirk than clever. Much of the dialogue looks like it was made up on the spot but it’s not always to the benefit of the story, which just barely scratches the surfaces of its characters. Even Buscemi’s John is mostly surface until the end when he becomes a little more three-dimensional as he comes face to face with his deepest fears. Malco is the only member of the supporting cast to have much more than a few token scenes and he creates a nice, if simplistic, dynamic with Buscemi. Silverman, a talented comic, underplays her office worker a little too much but still has a sweetness about her. Dinklage struggles to make something of the boss role, while only Cho among the “crazy” encounters manages to score, a neat trick since we never see his face.

The film was clearly shot on a budget but makes good use of mostly non-descript southwestern locations, other than the brief Vegas scenes.