close
What happens when you mix too many genres—er, species 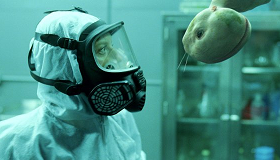 What do you get when you cross a kangaroo, a dolphin and a human? Sexy horror, at least to director Vincenzo Natali's thriller about a pair of scientists and long-time lovers (Adrian Brody and Sarah Polley) who create the daughter they never wanted in an experiment in “multi-specied morphism” that their bosses hope will cure cancer. Despite an A-list star and a high-tech plot, the film itself feels like a hybrid of silly science tingler and moral philosophy with a straight-to-video sheen—which is likely where their larger profit margins lie.

When we meet Brody and Polley they've just been slapped on the cover of Wired for creating a DNA smoothie that spawned two slug-like beasts named Fred and Ginger. The only missing ingredient is human chromosomes, and while Polley is reluctant to bear Brody's love child, she races to the lab to add her own genes to the mix. The result is Dren (spell it backwards), a moppet who looks like a hairless otter-kangaroo, except for the toxic stinger at the end of her prehensile tail. (Surely nothing bad can come of that.)

Dren awakens Polley's maternal instincts, and when she blossoms into a rabbit-legged supermodel with amphibious lungs she awakens something else in Brody's pants. Say what you will about the derivative elements of Natali, Antoinette Terry Bryant and Doug Taylor's script: this is the first flick I've ever seen with two counts of simultaneous incest-bestiality.

But despite Brody and Polley's reasonable efforts, they can't compensate for a script that undermines its curiosity about humanity, responsibility and guilt with silly loose ends about Polley's troubled childhood and odd flourishes like making Brody's lab technician his clueless brother. In steadier hands, this techno-drama could be a fascinating mutant, but not when we're asked to believe that it only takes two sexy scientists and one day to make "biotechnology's most startling breakthrough in decades."