close
Hitting the genre traditions a little too hard 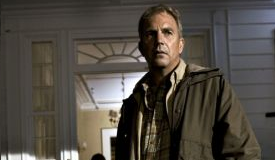 Though this film was literally snuck into a few theaters the day Avatar opened, the film is not nearly as awful as Anchor Bay’s lack of visible support might suggest. In this horror story Kevin Costner plays a father trying to figure out the increasingly strange behavior of his daughter after they move to a deserted southern home. The New Daughter is a lot of been there-done that hokum, but it does have some genuine scares and nice atmosphere. Costner’s name above the title won’t help in this genre but despite its DOA theatrical status it could find a nice following on DVD, which is probably all its distributor is thinking about anyway.

New Daughter angles to replicate the style of films like The Grudge, but the slow, moody pace it establishes in early scenes is actually more dull than intriguing. The film picks up considerably when John James (Costner) picks up his two kids, Luisa (Ivana Baquero, Pan’s Labyrinth) and Sam (Gattlin Griffith), and moves them inexplicably to an old rural home in South Carolina after his wife has abandoned the family. The house is the kind of creepy place you just know can’t be good for cheering up the kids. Sure enough, lots of strange occurrences start happening, especially after Luisa discovers a mysterious Indian burial mound outside. Pretty soon she becomes obsessed with it and starts acting very strangely. She also harasses poor Sam to the point where the audience is led to believe she’s the devil incarnate. In fact, it’s clear that there are other evil forces at work here which soon make their physical presences known. Can dad save the day and the kids from certain doom? Or why don’t they all just friggin’ move?

Of course, characters in this kind of movie never move—except deeper into the foreboding darkness. Still, the film has been directed with all the bells and whistles of the best psychological horror, which somewhat aligns Luis director Alejandro Berdejo with other masters of atmospherics and suspense, particularly Guillermo Del Toro. Despite the utterly ridiculous plot developments and the predictable nature of the story, you might find yourself soaking up the dreary, gothic atmosphere and jumping out of your seat more than once (but you’ll hate yourself in the morning).

It’s not clear why Costner signed on but he’s fine, if underplaying it all a little too much. This is definitely not the sort of material this once big movie star ever did in his prime and it’s a little disconcerting to see him caught up in it now. The kids don’t exhibit a lot of emotive moments, other than going from A to B, but they acquit themselves nicely anyway.

Special effects work is top drawer and the cinematography by Checco Varese is first rate.

Considering its commercial hook and name star it’s a bit of a head-scratcher as to how this thing got dumped. If they had dropped The New Daughter title, took Costner’s mug off the one sheet and just called it The Mound they actually might have had a modest hit.