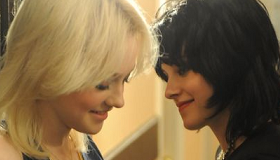 As two populist mediums concerned less with thought than with the senses, rock ‘n’ roll and the cinema ought to be a marriage made in heaven. They aren’t of course. Lest we forget: the movies drained dry as unlimited a power source as rock progenitor Elvis Presley, making the world watch with increasing apathy as an icon of menace and sex became dead, safe and dull—slowly and publicly. Music video director Floria Sigismondi’s The Runaways is far from a perfect movie, but there are moments when it comes about as close to catching the visceral kick of the pre-iPod rock experience as any film I’ve ever seen. It’s a natural born hit, especially given its Twilight connections (two of its young female stars are veterans of the tween vampire franchise). And parents, listen up: it will also probably be a better predictor of your daughter’s self-esteem for her to watch this drug-fueled, lesbian-inflected rise and fall of an all girl proto-punk band, rather than mooning over the Jonas Brothers, or learning the words to “Some Day My Prince Will Come.”

Ah the Runaways. Punk before its time, feminists but not yet women, product and revolution all in the same spandex pants. Oh sure, they were cast like a high school production of Little Women by idiosyncratic Svengali Kim Fowley, who saw dollar signs in the combination of guitars and jailbait. Mercury Records sold them to the ’70s Tiger Beat set like a novelty act (Look! Girls! Playing loud music! Shocking! Shocking!)—a tween competitor to the Partridge Family. But that’s the funny thing about pop culture. It generates prefab merchandise that’s also a form of expression, and sometimes something meaningful punches through. In Sigismondi’s movie, manager Fowley (Michael Shannon) sums it up by saying, “This isn’t about women’s lib, kiddies, its about women’s libido.” It’s a perfect line because it’s glib, it’s expressive and it shows how, as a man, Fowley doesn’t realize that for The Runaways “libido” and “liberation” are frequently the same thing.

Sigismondi understands this, intellectually if not always intuitively, and she’s willing to go there, and even at times to take things to extremes. The first image of the movie is also one of its best: a moist splotch of blood on pavement introduces us to Cherie Currie (Dakota Fanning), as her first period and the complex mystery of self-definition it inaugurates arrive in one fell swoop. Unlike most mid-1970s 15 year olds, Cherie’s adolescent rights of passage won’t be about mooning over a boy in biology class, or giving her hair that Farrah Fawcett swoop. A man and a dark-haired teenage girl (Kristen Stewart, all glowers and leather as Joan Jett) accost Cherie in a glam-rock nightclub. “We like your look,” they say. “We want you to be the singer in a band.”

You know the story that follows already if you’ve ever subscribed to Spin Magazine or seen a Behind the Music documentary. A group is formed, pays some dues and then implodes when the ticking timebombs of drug abuse and internal jealousy detonate, right at the threshold of the superstar dream. But what makes The Runaways unique is what made the band itself special: the way they predicted the punk revolution not only musically but by being crafted as an act of provocation. For in the same way that the Sex Pistols would later incite all of England by cranking up their guitars and shouting “No!” at the British welfare state, The Runaways liberated a forbidden territory—one rock had deeded to teenage boys for decades—and then handed that promised land to the world’s little sisters, too.

Calling this movie The Runaways is a bit of a misnomer because it’s less the story of the five member group than of a single friendship. Based on the memoirs of Runaways lead singer, Currie, but made with the strong participation of the band’s rhythm guitarist and principal songwriter, Joan Jett, The Runaways focuses on Currie aka “Cherry Bomb” (a bravura display of range and beauty from queen of modulation Dakota Fanning), Jett (a brave if limited performance from Kristen Stewart) and the unavoidable presence that is their eccentric manager and co-creator, Kim Fowley (Michael Shannon).

This is “history” decided by release form and likeness rights. Drummer Sandy West, who died of cancer in 2006, is in the public domain and so gets a warm if limited portrayal; bassist Jackie Fox, who grew up to become (of all things) an entertainment lawyer, is at war with Joan Jett over use of the band’s name, and so goes unmentioned. Lead guitarist, Lita Ford—a star in her own right—is criminally under-utilized and barely represented, except as some harridan objecting to Currie’s increasing prima donna-isms. An even more serious omission is the lack of any discussion of the charges made by Currie, that Fowley demanded his underage starlets satisfy his “special needs” in order to remain in the band. That was a different time, and it’s possible for Fowley to have been the same lovably manic showbiz savant he’s depicted as here and to have viewed statutory rape as a perk of management. But whether the claims made against him are true or not, they’re Currie’s, and it’s her story, so they deserve to be aired.

The three character structuring of a six character story hurts The Runaways but it isn’t fatal to it. The performance sequences are believable and frequently imaginatively shot, and the songs themselves retain their bratty power—the simultaneous taunt and invitation they made to boy and girl alike. Sigismondi is smart enough to consistently link the growth of the band with Cherie’s and Joan’s sexual awakening (liberation and libido being the same thing), and her visualization of a lesbian tryst between them is lyrical and sensitive, if too brief.

Surprisingly given Sigismondi’s background as a celebrated photographer and in music video, the cinematography and editing are frequently a bit flaccid and flat. But when the band takes “heckler lessons” from Fowley and then puts them to defensive use as their first gig ends in a shower of bottles and cans; or during the off-the-cuff creation of signature tune “Cherry Bomb” and a later performance of it before ten thousand screaming Japanese fans; the lightning strikes and the alchemical magic that turns a Joan Larkin into a Joan Jett is suddenly in the house.

That transformative energy—the notion that you can become what you choose to be rather than what you are, and that music is the key—is the core mythology of the rock ‘n’ roll dream, and Sigismondi deserves kudos for capturing something so unquantifiable about as well as anybody has, at least in a biography. If you’re a rock fan, The Runaways is a movie you probably want to see. Just make sure that afterward you find a dive bar somewhere where five kids who just learned their instruments are tuning up, and that you stay for the show. Because even when the simulation is fitfully spectacular, it’s never going to be a substitute for the real raw thing.