close
Chan saves the day (and the film) again

The Spy Next Door 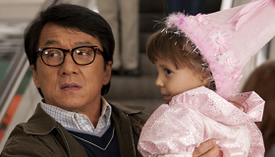 Jackie Chan's first ever bona-fide family film comes at an unusual point in his career-too late for him to be anything but a shadow of the star he once was, but none too soon for an entirely new generation to discover the joys of a genuine living legend. Typically savvy Lionsgate marketing and lack of genre competition should help the film overcome the back-to-school blues, earning decent enough numbers from both veteran fans and the newly initiated to prolong appeal on DVD, cable and, most notably, airlines.

Single suburban mom Gillian (Amber Valletta) faces a quandary: her boyfriend, bespectacled pen importer Bob Ho (Chan), appears to be just the kind of sweet, down-to-earth, reliable guy she desperately needs in her life. Unfortunately, her three kids-adolescent Ferren (Madeline Carroll), 12 year old Ian (Will Shadley) and 5 year old Nora (Alina Foley)-can't stand him. What none of them know is that Bob is really a spy, on loan to the CIA from the Chinese Government to help nab a particularly nasty Russian super-criminal named Poldark (Icelandic actor Magnús Scheving) who, with his leggy lady luck, Creel (Katharine Boecher), is about to hatch a plot to destroy the world's oil supply. But when Gillian leaves for several days to care for her ailing father, Bob faces the trick of having to babysit three unruly kids while somehow also finding time to stop Poldark's nefarious plan.

It's fairly clear from the get-go that this is something of a hand-me-down project-originally written by first-timers Jonathan Bernstein and James Greer as a generic action comedy for the likes of Dwayne "The Rock" Johnson, and eventually rewritten specifically for Chan by veteran script doctor Gregory Poirier when hoped-for first choices failed to sign on. Not that this makes Poirier's task any easier-Jackie Chan's English-language efforts, the success of the Rush Hour films notwithstanding, have never really measured up to his best Hong Kong pictures, a fact which The Spy Next Door seems content to admit with an opening title montage comprised of moments from many of those very films, including the two Armour of God pictures. More problematic, however, is the fact that Chan and Valletta have zero romantic chemistry between them, drawing stark attention to the film's haphazard construction right from the start. It's the kind of cloying family fare that pushes one's tolerance to the limits, embarrassing to the point of paranoia until a stairwell-and-scaffolding fight scene between Jackie and Scheving that recalls similar moments in Jackie's classic Dragons Forever. While it's clearly unfair to expect Jackie to exhibit the same physical abilities at 55 that he once did at 34, he remains far more agile and nimble than just about any other Hollywood action star of any age.

While it never quite rises above the problems inherent in the material, The Spy Next Door does shine in those moments when Jackie and his stunt crew are permitted to do what they do best, staging and executing the kinds of elegantly-choreographed, giddily entertaining fight scenes that have long since become synonymous with the name Jackie Chan. At the same time, the obligatory conceit of having the children play a part in Bob's spy activities, simultaneously helping save the day while developing affection for a man they once viewed as a hopeless geek, doesn't work any better here than it has in a dozen previous films that employed similar tactics. But Chan's charms are infectious, even in mediocre material, making The Spy Next Door uncannily bearable even when it should be utterly off-putting.

Fortunately, director Brian Levant (The Flintstones) is smart enough to generally leave well enough alone, granting Jackie ample latitude to handle his own action scenes while allowing Scheving and Boecher to go deliriously over-the-top with their Boris & Natasha-inspired performances. That obviously doesn't save the film from its most glaring offenses, but knowing that the director is taking it all in stride as well definitely helps release some steam. In all, The Spy Next Door won't be regarded as anything but a minor effort in Chan's stateside repertoire, though its better moments should go a long way toward winning the ageless Chan a new audience of adoring youngsters-hopefully nudging them toward discovering the earlier efforts that remain among the most timeless treasures in movie history.