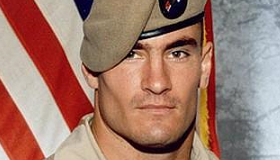 It would be interesting to poll today’s American public about the 2004 death of football star turned Army enlistee Pat Tillman. My guess: six years later, most people would still believe in and recall the original, entirely fabricated storyline created by the Pentagon, which had Tillman mounting a San Juan Hill-style attack against Al Qaeda militiamen and sacrificing himself to save others. The power of first impressions is something every propagandist or salesperson knows about, and Tillman’s death, which was turned into a televised pageant where his family was presented with the Silver Star, made quite an impression indeed. The only problem: everything the army was telling the Tillmans was a lie.

Refuting that lie and trying to get to the bottom of what really happened is an ongoing process, one filmmaker Amir Bar-Lev’s excellent new documentary The Tillman Story should advance measurably. Bar-Lev, who is best known for his feature documentaries Fighter and My Kid Could Paint That, is an acquaintance of this writer—Tillman underwent a last minute title change and this assignment was therefore accepted without any awareness on my part that I might be commenting on the work of a casual friend. The rousing standing ovation The Tillman Story got at the Sundance screening I attended convinces me that my opinion is justified by quality not friendship. That screening was for the people of Park City—normal folks, not the Hollywood types who make up 99 percent of the temporary Sundance population. These average Utah citizens thought The Tillman Story was terrific, and I did too.

Despite the political hot button Tillman pushes, Bar-Lev is not in any sense a cliché axe-grinding liberal documentarian. Both Fighter and My Kid were grounded in character, and The Tillman Story is too. Because of his superstar status in the NFL and his prior college ball career, Tillman left behind a sizable number of video interviews as well as stock footage documenting his gridiron heroics, and Bar-Lev uses these to bring an intricate and life-loving individual back to life. Tillman emerges as quite a man—humble and thoughtful, intellectual as well as athletic, deeply loyal to his family and to his adopted home state of Arizona. He marries his high school sweetheart—the only woman he ever dated, despite the myriad personal opportunities of the professional athlete. When he leaves the NFL and enlists after 9/11, his brother Kevin enlists too.

In joining the Army, Tillman’s financial and professional sacrifice was a very real one, and it struck a national chord. Though Tillman himself characteristically refused to comment on what he considered a private matter, the narrative he’d created was recognized immediately by the Bush Administration as useful to the war effort, with Secretary of Defense Donald Rumsfeld sending Tillman a personal thank you note (an unheard of gesture), and internal Pentagon memos from Rumsfeld arguing that “we should watch this guy.” At the time Tillman died the war was going badly, and he was killed in a way that might have resonated with the public as emphasizing that fact: shot by his own comrades, a victim of friendly fire.

The Tillman Story illustrates the amazing lengths the Pentagon went to in order to hide the details of that killing, not just from the American people but also from his bereaved family. It seems clear the army expected the Tillmans to accept their Silver Star and their folded flag and then just go away. Instead they forced the issue again and again, compelling the Pentagon to open new investigations each time they declared the matter closed, and even getting a Congressional hearing, where top military brass performed with shameless evasiveness and “can’t recall” responses, right there on national TV.

Bar-Lev orchestrates this complicated story with a refreshing clarity and an unassuming but masterful technique. It’s bracing to see a documentarian willing to orchestrate his material without indulging in the flashy but insubstantial Power Point aesthetic that has become a contemporary documentary cliché. There is no stylized computer animation in The Tillman Story, and none of the tricky editorial theatrics the modern nonlinear edit system has popularized are called into service for cheap visual effect. Bar-Lev’s purpose is to let the material speak for itself wherever possible, and to let the Tillman’s tell their own story, while the documentarian simultaneously gives it shape and gets out of the way.

In their relentless and dogged pursuit of answers and their stubborn refusal to allow the military to appropriate and change the meaning of their son’s life and their own loss, the Tillmans emerge as the other heroes of the Pat Tillman saga—a tragic farce’s single ray of light. Because while what happened to the Tillmans is enough to make any sensitive viewer despair over the twisted cynicism of American politics during wartime, their implacable campaign of speaking truth to power represents everything the American idea is supposed to be about.