close
Worth a trip. 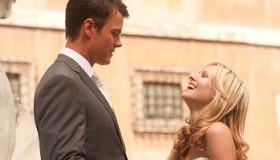 When in Rome is a romantic comedy marketed as a product of “the studio that brought you The Proposal.” Disney’s Touchstone label is trying to strike lightning in a bottle again and imitate the success of Sandra Bullock’s summer hit. Although it falls short of that goal, When In Rome is entertaining, full of laughs and, as far as chick flicks go, is a sweet, romantic trip worth taking for audiences so inclined. Toplining Kristen Bell as a romantically challenged career woman who takes coins from a “magic” fountain and soon finds herself pursued by their original owners, the film should land a decent, if not “magic” amount of coins at the box office and have a happy ending on DVD.

Bell plays Beth, a Guggenheim Museum art curator, disillusioned in love, who gets more than she bargained for on a weekend trip to Rome for her sister’s wedding. There she meets handsome and charming reporter Nick (Josh Duhamel). What starts out as a promising romantic turnaround in her life becomes complicated when she mistakenly believes she sees him kissing a girlfriend and out of frustration grabs coins out of a fountain of love (instead of throwing them in). She instantly finds herself the object of affection for a quartet of looney guys who were the original coin tossers and whose romantic desires are suddenly reawakened by her spur-of-the-moment act. With this group on her tail, Nick also decides to pursue her, although she can’t be sure he’s doing it for real or because she happened to retrieve one of his coins as well.

The flimsy, whimsical plot follows an entirely predictable path but serves as a showcase for some light-hearted fun with an assortment of character actors doing their comic thing.
Standing out among the pursuers are Danny DeVito as a smitten sausage king, Jon Heder as a goofy street magician, Will Arnett as an amorous Italian painter and, funniest of all, comedian Dax Shepard as an aspiring and completely uninhibited male model.

The film darts back and forth between their individual quests and her tenuous relationship with Nick who doesn’t really know why she suddenly turned cold on him when things were going so well. Duhamel (TV’s Vegas) proves a natural comic talent and scenes between him and Bell take on a sweet screwball quality not usually evident in this kind of cookie-cutter romantic comedy. DeVito, Heder and Arnett get laughs but Shepard steals the show with his self-centered antics. Although all are over the top eventually they come to be a likeable group of shlubs, almost like dwarfs to Bell’s Snow White. Among others in the cast, Anjelica Huston brings a little gravitas as Beth’s museum boss and Alexis Dziena sparkles as her sister. Former Mod Squad star Peggy Lipton even turns up briefly as her mom.

Director Mark Steven Johnson, lately better known for his comic book movies Daredevil and Ghost Rider successfully returns to his comedy roots (Grumpy Old Men) and gives David Diamond and David Weissman’s script some nice off-kilter amusing touches. When In Rome is ultimately a trifle but with little competition in the genre it serves as a great date movie for the new year.