close
An indie star is born 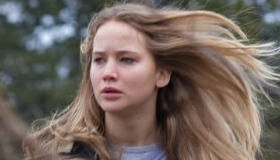 A stunning journey through a world that’s as close as a plane ticket but as exotic and dangerous as the mountains of the Moon, Winter's Bone deserves to be the major commercial breakthrough for both director Debra Granik and Jennifer Lawrence, its luminous, moon-faced star. Based on the novel by Daniel Woodrell and set in the remote hill country of Southern Missouri, Bone is on the surface much like a mafia movie—a journey through the dangerous byways of a submerged continent of crime, vice and lurking violence. But if the film’s dramatic engine is in genre, Granik’s unflinchingly environmental direction and the uniformly nuanced and truthful performances she gets from every member of a vast ensemble launches Winter's Bone so far past any notion of formula or precedent that comparison is a futile exercise. This film is a thing all its own.

Lawrence plays Ree, a hardened but not bitter 17 year old girl who dreams of escape as a military enlistee but whose hard-scrabble life chains her to the run down cabin she was raised in. Her mother is a ghost, silenced by clinical depression; her dad a recidivist “crank” chemist who just made bond by leveraging the family house and grounds and then skipped bail. As de facto head of her household, Ree must find her father, or she, her mother and her young brother and sister will lose everything and the family will dissolve in a welter of eviction, foster care and social services. Ree’s episodic odyssey—as rich as Odysseus’s or Huckleberry Finn’s—takes her deep into the black heart of rural drug culture, using the urgency of her quest to paint a vividly believable portrait of an entire culture, with all its malevolence and unexpected grace.

Jennifer Lawrence, whose resume includes such unexpected journeymen curios as Drillbit Taylor and TVs Medium and Monk, inhabits Ree with a strength and tenderness that shimmers from the screen. It’s a shock to look at Lawrence’s credits and realize her utterly dimensional creation is a “performance,” for Ree is not so much depicted as conjured into being and lived out before our eyes. She’s a product of a raw, Darwinian environment, and there’s no weakness in her, though there is maternal warmth as well as vulnerability and despair. With Ree, Granik, Lawrence and Granik’s co-screenwriter Anne Rossellini have created an icon of female strength and endurance without falling into the trap of simply embodying the trite formulas of macho movie masculinity in a feminine form.

The supporting cast is flawless, with John Hawkes especially outstanding as Ree’s terrifying uncle “Teardrop”—a man torn between criminal codes of honor and silence and the obligations of his blood. But even the smallest parts are given Granik’s full creative attention—if you want to see what great direction of actors is, watch the single scene between Ree and the military recruiter who seems to live in the gymnasium of her local high school, a character so subtly delineated that in a single scene of stilted official dialogue you feel like you know what games he likes to play with his children, or how his eyes look when he watches the sunset over the mountains just before night.

This attention to detail is necessary because the milieu is Lawrence’s main co-star, and Granik’s direction occupies it so completely that watching Winter's Bone is like being initiated into a secret society—not in the touristic sense the few films dealing with Ozark life tend to settle for but down deep, in the marrow of a hidden realm. There are many things about American life movies routinely ignore, trivialize or get wrong—the Boston accent, the terse and laughing stamina of American blue collar life and the cheap fluorescent sheen of modern strip mall monoculture would be but three examples.

When it comes to the impoverished and isolated wilds of the rural south, filmmakers tend to create noble savages by defaulting into WPA-era liberal decency; or to revisit the James Dickey/John Boorman paranoia of Deliverance—a film that is not so much about the Southern countryside as it is about the cityslicker’s fear of it; or else they’re still stuck in Al Capp’s Dogpatch, where every character is a picturesque rube and every household has access to a joyously percolating hillbilly still.

In Winter’s Bone, the backwoods still is replaced by explosive meth labs and “crank” cookhouses, and the bib overall wearing hayseed cliché has been evicted in favor of a treacherous but strangely moral underworld that seethes with tension and life. Granik, Lawrence and all their collaborators have created a movie that doesn’t just deserve to be seen. It deserves to endure.