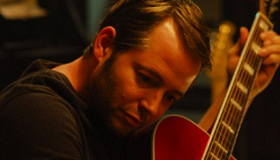 They say dumb people think life is a comedy, while smart people think life is a tragedy. For Ben Singer (Matthew Broderick) life is an endless parade of injustice, suffering, crushed dreams and moral turpitude. Ben is, in other words, a downer; the type of character whose redemption is the stuff clichés are made of. But in his directorial debut, screenwriter Joshua Goldin never oversells Ben’s acidic worldview, nor does he fall back on hip and easy bile or tempting doses of sentimentality. Co-credit for this goes to Broderick, who hasn’t a show-off bone in his acting body. Not all of this works, but it achieves a nice amount of lift utilizing modesty and soft edges. However, it won’t get much lift at the box office, with home video its most profitable destination.

Broderick (like, come to think of it, 2012’s John Cusack) has never given a truly great performance, but he’s done so much nice work for so many years looking basically the same that he’s become a comfortable sweater of an actor, dependable and always up to the task. Indeed, he’s Wonderful World’s only selling point and, as the job requires, he carries the movie. A former singer of children’s songs whose career fizzled years earlier, Ben is a walking buzz kill, trapped in the hell of knowing how horrible and cruel our existence really is. Not deluding himself with hopes and dreams, he works as a proofreader and shares a one-bedroom apartment with his snoring, diabetic, Senegalese roommate, Ibou (Michael Kenneth Williams). Ben is, no doubt about it, a lonely and cynical man. But Broderick, thankfully, doesn’t have it in him to make Ben truly unlikable, even when he fills the head of his pre-pubescent daughter, Sandra (Jodelle Ferland), with his pissy rantings.

The problem with people like Ben is that they think they’re doing you a favor with their blunt assessments of personal, societal and corporate evil. But even if they’re right, it’s not a good enough reason to let poisonous thoughts run your life and ruin the lives of those around you. Ben’s ex-wife certainly can’t handle his attitude anymore and Sandra is fast heading south. It’s even a mystery why Ibou, who is Ben’s good-natured and appreciative opposite, would want Captain Bring Down as a roommate. Although here’s a theory: Ibou is a version of the old Magical Negro trope, where a black character aids in the emotional growth of a white character and, sometimes, sacrifices himself for the effort. It’s doubtful Goldin had the Magical Negro concept in mind when he created Ibou, but when the Senegalese immigrant falls into a diabetic coma, it begins a process that allows Ben to start reevaluating his approach to life. If Ben’s impending transformation sounds like an uninspired spin on every other movie where the main character comes to appreciate life, that’s because, on the surface, it is. But in these cynical times, the film’s refreshing lack of cynicism wins the day, even though its main character practically drips the stuff.

Ibou’s troubles also allow for the introduction of his sister, Khadi (Sanaa Lathan), who has arrived from Dakar to tend to her brother’s health. Even here, Goldin keeps the strings of manipulation far from view. Khadi is another direct and obvious counterpoint to Ben. She appreciates the large and delicious fruits for sale in America (filled with pesticides, Ben inevitably adds) and the availability of quality footware for her poor Senegal family. But most importantly she believes in everything a bitter realist cannot: rituals, miracles and the magic that is “everywhere.” As feelings develop between Ben and Khadi, it becomes increasingly stranger to watch Broderick play the romantic movie character. Yet that actually makes his growing interest in Khadi easier to swallow.

Less easy to swallow are Goldin’s stabs at Corporate America and our Me First culture. He fumbles with a poorly written courtroom speech after Ben sues the city in the wake of Ibou’s diabetic attack. And while any appearance of Philip Baker Hall equals good times, here he’s underutilized and ill-defined as Ben’s hallucinatory manifestation of The Man, to whom all common folk must bow. Otherwise, Wonderful World soft sells its clichés so effectively and without guile they seem fresh in the telling. Then again, maybe you can never overuse the concept of people learning how to be happy.