close
Softer than the book but similarly sweet 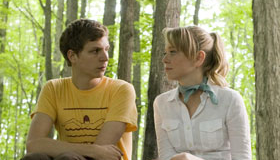 America's sweetheart Michael Cera wears training wheels—or really, a training mustache—in his first attempt to go bad. Half bad, at least. In Miguel Arteta's comedy (based on the great series by novelist C.D. Payne), Cera plays Nick Twisp, a stuttering virgin who adopts a roguish split personality named Francois Dillinger to win over his lady love, Sheeni (Portia Doubleday). Light, comic, and less black than the books, this is a fun piece of fluff that melts away like cotton candy. At heart, this is a cult flick at home on DVD players, but ticket sales will be sweet enough.

It helps that Arteta has assembled a standout character actor cast. Among the grownups plaguing Nick's life are his divorced pop (Steve Buscemi), mom (Jean Smart), mom's first boyfriend (Zach Galifianakis) and her second (Ray Liotta). Dad's girlfriend, Estelle (Ari Graynor), doesn't count as the sweet blond is just a few years out of high school. Mom's man-crazy and makes their family vacation to an RV park super awkward, what with the trailer rocking and all. But when Nick meets Sheeni, the hell trip is worth it. They're equally pretentious. Only her parents are religious middlebrows who own a two-story trailer—the better to fit in their pipe organ—and Nick knows if he's ever going to score with his lady love he's got to find a way back to their hick town and fast.

Enter Francois. He's a mustachioed rebel who does the things Nick shudders to do—like scheme to get evicted from home to get closer to Sheeni. But his girl is worse than he is and might be using him as a tool to get closer to her other boyfriend, Trent (Jonathan B. Wright), a 6'7” poet who has 40 pounds of muscle and fluency in French on the slim, stuttering Twisp. (And if she is still chasing Trent, Nick's new passion project is sabotaging her life.) As the cigarette-smoking Francois, Cera is hilariously wicked—he needs to do eight more roles like this before he takes on another nervous nerd in a hoodie. Of course, that Cera opens the film whacking off is already enough to make some fan girls' heads explode.

Payne's book is more epic and shameless than Gustin Nash's tidy adaptation, which focuses as much on Nick's virginity problem as his need to top everyone with the wildest stunt. Sex is a little too conventional a goal for the kid willing to dress like a Christian girl named Carlotta if it'll get him in Sheeni's front door. (In print, the Carlotta adventures are an extended riot.) But the cast is so good and the humor so zinging that I'm glad the flick exists—especially if it prods audiences towards the series. Fred Willard’s reliably great as an ultra-leftist neighbor and Justin Long stands out as Sheeni's older brother who invites everyone on a clichéd but fun wild mushroom ride.