close
A dark horse for the Foreign Oscar 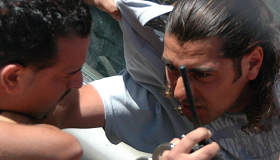 If there’s a dark horse against favorites A Prophet (Un Prophète) and The White Ribbon in this year’s Best Foreign Language Film Oscar category it’s the stunning Israeli entry Ajami, a timely and timeless look at the intersecting lives, fortunes and fates of Jews, Christians and Muslims in the fragile Ajami neighborhood of Jaffa, Israel. Extraordinarily accomplished and deeply provocative, the film’s appeal among sophisticated filmgoers should remain strong throughout Oscar season and beyond, giving distributor Kino International one of its best performers to date. Beginning with a jarring revenge killing linked to clan warfare among local gangs, Ajami dovetails into a series of stories told in chapters, a nonlinear quilt of interlinked lives whose fates and connections only become manifest as the film spirals to its unexpected conclusion. Unlike most recent Israeli and Palestinian films, the key themes here are more local than global, with the unavoidable clashes of religion and culture impacting romantic and family relationships more than geopolitical ones. Religion as lifestyle, lifestyle as religion, the illicit drug trade, the peculiar vagaries of Israeli citizenship, the divisions even between Arab-speaking Christians and Muslims and between observant and cultural Muslims are just a few of the themes that permeate the many stories here, all of which wrap back around to the tragic inciting incident with unforeseen consequences and ancillary effects that will undoubtedly continue to go around and around. Jointly written, directed and edited by Yaron Shani—an Israeli Jew—and Scandar Copti—a Palestinian with Israeli citizenship—Ajami plays out like a cross between a Middle Eastern version of Crash and a Mike Leigh-style verité workshop. Brought together at the 2002 Tel Aviv International Student Film Festival, where Shani was director and Copti was a participating filmmaker, the future co-directors evolved a project that would rely largely on non-actors responding in spontaneous ways to mostly improvised situations, with only Shani and Copti—who also acts in the film—knowing precisely where they were going and how the various stories would intersect. Portmanteau films of this type are, of course, nothing new—the aforementioned Crash, Magnolia, Nashville, Babel and a variety of recent French films, including Paris and Avenue Montaigne, are but a few of those that have inherited and added upon the legacy of the Oscar-winning Grand Hotel. Ajami, however, is the first such film to apply the form in a meaningful way to a part of the world that would otherwise seem ideally suited to it. That it does so without trafficking in the clichés and conventions that have increasingly become a part of Middle Eastern filmmaking, and Israeli filmmaking in particular, merely makes the entire effort richer and more satisfying. With studios shutting down their specialty divisions and those that remain increasingly disinclined to acquire and release foreign films from any country, it becomes all the more crucial that lower-level independent distributors like Kino International be able to succeed with their theatrical operations, making films like Ajami all the more vital for the industry at large. Distributor: Kino International Cast: Shahir Kabaha, Ibrahim Frege, Eran Naim and Scandar Copti. Directors/Screenwriters: Scandar Copti and Yaron Shani Producers: Moshe Danon and Thanassis Karathanos Genre: Drama; Arabic- and Hebrew-languages, subtitled Rating: Not rated. Running time: 120 min. Release date: February 3 NY