close
A luxurious update on the classic and horrible fairy tale 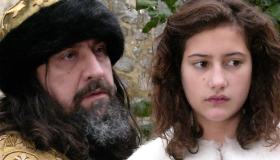 The director of The Last Mistress, Sex is Comedy, Romance and À ma soeur returns with an original take on the fairy story about Bluebeard. Expect niche business for arthouse followers of director Catherine Breillat and lovers of costume drama with a French twist.

As a young, impressionable girl growing up in the 1950s, French director Breillat, who has earned a certain notoriety for her no holds barred depictions of sexuality on screen, scared herself to sleep by reading fairy tales such as Bluebeard. It’s no surprise then to find that one of the two young sisters who tell tales to each other is called Catherine, the younger of the two who insists on disturbing her older sibling Marie-Anne by reading Charles Perrault’s story Contes de ma mère l’Oye. By the end of the story the poor girl is so upset she bursts into tears.

The 17th century story within the story starts unfolding: a young girl (Lola Créton) is married off to Lord Bluebeard (Dominique Thomas). A sort of medieval serial killer, Bluebeard is rumored to have murdered his previous wives.

Strangely and despite the generation gap, the couple seems to get along, at least for a while, yet there is the horror that lurks within the story that ultimately demands a moral. And it is the virginal Catherine who winds up in possession of the monster’s head—instead of the other way around.

Princess Marie-Catherine, who was Bluebeard's last wife, escapes the fate of all those he hung before her. Being a virgin princess that the ogre cannot make up his mind to kill, his hesitation will doom him.

Breillat directs with her characteristic flair for getting under the skin of her protagonists while taking a particular pleasure examining sisterly bonds and feminist concerns within the context of a fairy tale. It is austerely shot with economy of style.

Dominique Thomas has an amazing presence as a variation of a popular figure based on the real life Gilles de Rais, a comrade-in-arms of Joan of Arc and infamous child murderer.