close
Even detractors will be softened by the sentiment

Céline Dion: Through the Eyes of the World 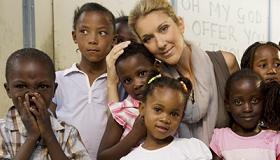 A Sony/Hot Ticket release, Céline Dion: Through the Eyes of the World is a concert doc with Behind the Music style touches that targets Dion’s not inconsiderable fan base. Following the singer/super-star around on her Taking Chances World Tour, the overlong but well tuned film sees Dion onstage, in public and with family. In sum, what you see is a woman and a family that handle celebrity with a unique grace. Though the trailer for the film smacks of limousine activism and self-aggrandizement, the film—while not without its show biz bling—courts the big spirit and ebullient affection we’ve come to associate with the singer. In short, if you like her, you’ll likely love her after the film, which I suspect is timed to usher in a return world tour. I don’t have any inside info on that but odds are good this is a possibility and box office will, no doubt, confirm demand for it.

Through the Eyes of the World takes Dion from Mumbai to Macau to Seoul to Vancouver, and finally to Omaha in 2008, where her Taking Chances World Tour resulted in a year and a half long break from touring. Director Stéphane Laporte treats both the locations and the chronology of the tour loosely in the interest of creating narrative flow—sadly that’s just the kind of thing the hardcores find annoying. This is a film about a singer who might one day be remembered as the Lady Di of pop—an interesting situation on its own. But Dion’s not a world renowned humanitarian (yet), what she’s done is produce a massive brand of popular song that, while wildly overproduced, earnestly hopes to bring joy to the world through music—and by “the world” I mean “All the parents and all the children.” Yes, the tour is the visual equivalent of the gaudy jewelry you see at Tiffany’s—it telegraphs its price tag by being over-the-top—but she and her crew mean every bit of it, and that’s something to ponder.

At 1998’s Oscar Show, Céline Dion’s My Heart will Go On competed against Eliott Smith’s Miss Misery for Best Song. Dion’s production, a high budget demonstration of “schmaltz and heart” (a quote I borrow from Michael Curtiz’s White Christmas) appeared complete with a white-tuxedoed full orchestra, light show and more fog than surrounded Kate Winslet as she laid on a door in the ocean. This example of “Understatement!” preceded Elliott Smith’s performance (consisting of Smith, lights and his guitar) in a kind of production value trumping that divided the audience by niche: as with White Christmas, what was competing was not just two approaches but two distinct brands of sincerity—both equally marketed. (Like my friend Tim Ryan says, “Nobody makes anything to get ignored or go broke.”) That seems to be the same culture war that surrounds Dion in this film—because her high-production value sincerity can’t help being opposed to one of a lower production-value just for the sake of definition. Dion’s good intentions dovetail into the lives of her fans, which come to her saying things like “your music saved me when I was in the ICU,” or “I gave my son a kidney and he wanted to meet you.” To the latter she responds, “You could have given him your heart. It meant the same.” She does it all with the dry eye of a diplomat and then goes to her dressing room where she tells her husband about it and fans her face (to prevent mascara running) and says “I can’t talk about this—and before a show!!!” It’s melodrama, for sure, but not a bit of it seems disingenuous.

At the same time Through the Eyes of the World takes place in the middle of a show biz culture—it’s a context where tender human moments are met with applause. To her credit, Dion seems like a leader in this highly emotional environment. When she returns to Montreal for a show she says to a friend, ‘Why are we so emotional for shows in our hometowns? We want to see our schoolmates so they wish they were friends with us.’ It’s a great loaded sentence, full of modest understanding and experience, and stands as a good representative of the kind of simplified sentiment that, while stripped of anything with particular nuance or great depth, gets right to the point (and the heart) anyway.