close
As sleepy as it is sappy 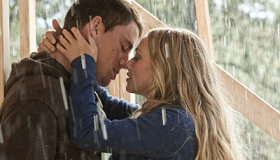 As flat as the Carolina coastal region in which it’s set, Dear John features two gorgeous young actors playing denuded characters in search of more narrative garb. Without aspiring toward the lachrymose heights (or depths) of The Notebook, also from a Nicholas Sparks novel, this epistolary nap needs a jolt of sentiment and a story structure able to withstand the ensuing tremors. Nevertheless, with targeted moviegoers presumably eager to bypass a shorn John Travolta in action mode and reluctant to see Avatar for a second or first time, Channing Tatum and Amanda Seyfreid should draw plenty of heat-seeking romantics this winter weekend.

Given the comely and talented leads, it’s disappointing how little carnal or emotional heat is actually generated. They’re not to blame and neither is the sensitive, desultorily competent helming of Lasse Hallström. Fault lies with a story better suited to the page than the screen. Thanks to Tatum and Seyfried’s naturalness and likeability—along with the sun-dappled, sea-island locales near Charleston, South Carolina—the connection between Special Forces soldier John Tyree and local belle Savannah Curtis is irresistible during reel one.

They meet in the spring of 2001 while he’s on leave surfing near his father’s house and she’s on vacation from college. Their two-week idyll is believable and tastefully rendered. What follows is murky and flavorless. During his twelve-month tour, the shy hunk with a bad-boy past and the generous, doe-eyed blond communicate via letter. According to screenwriter Jamie Linden’s adaptation, world events and John’s sense of duty in response to them prove to be a greater barrier than their socio-economic differences or any rival lover.

From the viewer’s perspective, John and Savannah’s inability or unwillingness to articulate their thoughts and feelings—despite their furious letter-writing campaign—is what hobbles the proceedings. Her neighbor (Henry Thomas), who has an autistic son, and John’s reclusive father (Richard Jenkins) anchor the subplots. The elder Tyree character doesn’t scan. Is he autistic, agoraphobic, obsessive-compulsive, or merely an example of a good actor stuck in a terrible role? The lack of detail about this father-son relationship mirrors everything that goes unsaid between Savannah and John and is another reason the story sputters. Their sketchy bond does provide the film’s most emotional scene and an opportunity for Tatum to show he can deliver the acting goods and turn on the waterworks.

In addition to the ability of two people on opposite ends of the world to gaze at the same moon, coin collecting is the movie’s guiding trope. The willingness to cherish flawed specimens, echoed in Savannah’s desire to help those with special needs, is a dominant theme, along with isolation and abandonment. And yet her treatment of John is quite perplexing. She comes off as more obtuse than fickle. You might even conclude Savannah is a little learning disabled herself. That’s an unintended consequence of taking a story based on letter writing and stripping it of words and dialogue, presumably in an effort to avoid seeming syrupy or manipulative. Instead, the filmmakers rely on unenlightening voice-overs, pale ballads (Seyfried is allowed to showcase her musical talents in a brief Joni Mitchell interlude), and rather pedestrian montages featuring mail sorting and military mailbag routines that would make the Postmaster General proud. Reportedly reworked after test-screening feedback, the conclusion feels tacked on and is less than satisfying.

To return to a weather metaphor, Dear John needs a hurricane but all we get is one fleeting rain shower. Where sensuality is concerned, it also amounts to a tease since the lone sex scene doesn’t earn the film its PG-13 designation. Switching to a food analogy, Dear John is like a dish of vanilla ice cream drizzled with a butterscotch sauce. About halfway through way you realize it’s insufficiently sweet (or savory). Putting two cherries on top in the form of Tatum and Seyfried and calling it a sundae just doesn’t cut it.