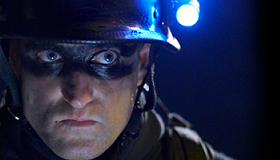 Movie superheroes are big box office these days. Batman, Superman, Iron Man, the Incredible Hulk, Spider-Man and the Fantastic Four have loomed larger-than-life—or at least as big as the IMAX screen will allow—in recent years. Into that mix comes Defendor, an often goofy, ultimately moving comic drama in which a self-proclaimed superhero operates within far more human dimensions than his comic-book-inspired brethren. The object of a bidding war ultimately won by Sony at the Toronto International Film Festival, Defendor stands little chance of becoming a blockbuster in the vein of all those other superhero movies, but its inventiveness ought to generate healthy box office returns.

By day, Arthur Poppington (Woody Harrelson) makes his living holding traffic signs at construction sites. His real self comes out at night when he dons a homemade, duct tape-trimmed superhero uniform and prowls the streets of Hammer Town in search of his archenemy, Captain Industry, the villain he believes killed his mother. One night he rescues Kat (Kat Dennings), a prostitute, from the clutches of corrupt cop Chuck Dooney (Elias Koteas), which brings Defendor closer to his target than he has ever been before, but also puts him square in the middle of an undercover investigation and in far more danger than he realizes.

In its satire of the superhero genre, writer/director Peter Stebbings is spot on, right down to having Harrelson in his Defendor guise adopt the same ridiculous, obscene phone caller growl that Christian Bale uses when he dons Batman's cape. Defendor may not have actual superpowers or a billionaire's budget to bankroll a superior arsenal, but working out of the construction company's workshop he has fashioned a number of ingenious (and hilarious) crime-fighting tools.

Stebbings could have stopped at brilliant comedy, but his ambitions are bigger. The movie's framing device, in which Arthur explains his situation to Dr. Park (Sandra Oh), a court-appointed psychiatrist, as well as its blunt violence, suggests something more serious going on, but the drama only gradually emerges out of the laughs as Arthur's vulnerability becomes pronounced. Harrelson has never been better in a role that echoes the character that made him famous, Cheers’ naïve bartender Woody Boyd, but with a lot more damage. Arthur is described as "slow," but really he is stuck emotionally at nine or 10 (the point where his mother died), and that leads him to live his life as if he is the star of his own comic book. That tension between silly comedy and poignant drama could have been dicey, but Stebbings and Harrelson maintain just the right balance between the two. Some of those far more lavishly budgeted superhero movies could learn a thing or two from this little movie that could.