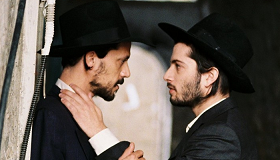 Besides tackling such a taboo topic, Haim Tabakman’s feature directing debut fascinates for the powerful, multi-layered themes that percolate beneath its visually spare and delicately told story. Israeli stage veteran Zohar Strauss plays a married butcher in Jerusalem whose latent homosexual desires are aroused by the arrival of Ezri (Ran Danker), a yeshiva dropout freshly dumped by his boyfriend. There is such a wealth of moral and religious issues on offer that its purposely bloodless approach shouldn’t blunt its impact with literate, receptive viewers. True, this is more of an intellectual experience than an emotional one. But given that too many films about the gay community traffic in cliché and camp, Eyes Wide Open deserves ample stateside viewing, despite the Middle East setting. Achieving that level of popularity, however, is doubtful. In placing his same-sex lovers within a religious context, Tabakman is not creating an angry indictment against Judaism. Indeed, it’s hard to imagine a more evenhanded approach to this subject matter, one that dramatizes religious intolerance without kicking religion in the teeth, a heck of a trick. What it does is establish how Orthodoxy combines religion and community and those who cross its moral boundaries risk being condemned not only by their faith, but also their friends. In his opening shot, Tabakman announces his intentions. Aaron, cement block in hand, breaks the chains that keep him from entering the butcher shop he inherited after his father’s death (it’s no accident that Aaron’s sexual awakening was made possible by the death of someone representing an older generation). Sad eyed and slow moving, Aaron is hidden beneath the trappings of his faith: the hat, the long beard and the flowing coat. As in many Orthodox disciplines, marital relations have a dispassionate, sometimes dryly ritualistic, quality. Aaron and his wife Rivka (played by Tinkerbell, yes, that’s her name, don’t ask me, I just work here) sleep in separate beds that are pushed together before intercourse. But his long-repressed sexuality is re-ignited by the appearance of Ezri, rejected by his boyfriend and now completely adrift. Taking pity on this homeless stranger, Aaron gives Ezri a job at the butcher shop and lets him crash in his father’s old room. Their friendship becomes something altogether different when Ezri invites Aaron to take a skinny dip in a local freshwater spring, which becomes, if you will, a baptism. Aaron’s nervous, tentative swim triggers the dissolution of the bonds of religious stricture that have kept his passions dormant. Under the wise guidance of Tabakman and scripter Merav Doster, the moral and religious ramifications of Aaron’s actions never come close to melodrama. Ezri’s pursuit and Aaron’s awakening have a subtle complexity that’s otherwise missing from almost every film in this genre. We’re given numerous questions to consider, but it comes down to self-identity: is Aaron gay or is he an Orthodox Jew? Because he cannot be both. His actions soon result in verbal threats and public ostracizing engineered by the neighborhood group that enforces religious adherence. They denounce Ezri as “a curse on the righteous man.” They distribute leaflets claiming “A Sinner in our Neighborhood.” It is behavior that can be explained by religion, but not justified by it. Ironically, Aaron himself is made witness to this Orthodox Mafia via a parallel story about a woman who’s been promised to one man, but is seeing another. It’s convenient, to be sure. But it widens the film’s scope, making it a universal position paper on how organized religion cannot reconcile itself with (and basically has no room for) some of our most basic and occasionally messy human needs. Tabakman’s ability to remain passive in the face of such religion-fueled injustice is Herculean, but it gives the film its power. Everyone is under control in dual ways: they keep their emotions under control, while also being under the control of religious dictums. This is a film of few words and gentle, meaningful all-too-human touches, as when Aaron puts his arm around Ezri the first time he uses a meat slicer. Or when Aaron’s wife, powerless against the passion that Ezri has unleashed, softly kisses her husband’s hand. Emotion dictates style here, which may feel like slow-going to some. To say the movie is understated is an understatement, yet it’s justified. Tabakman’s still, watchful camera stands back and witnesses a deeply religious man breaking the social norms of his Orthodox community. The result can only be tragic, because unfettered expressions of carnal desire are incompatible with the demands of religious thought. Because desire is uncontrollable. Distributor: New American Vision Cast: Zohar Strauss and Ran Danker Director: Haim Tabakman Screenwriter: Merav Doster Producers: Rafael Katz Genre: Drama; Hebrew- and Yiddish-languages, subtitled Rating: Unrated Running time: 90 min. Release date: February 5 NY