close
To have fun at this shooting range, set your sights low.

From Paris with Love 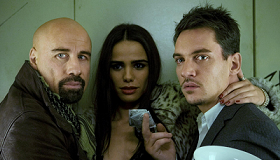 Super Bowl weekend seems an odd time for Lionsgate to open this male-appeal action flick but the distributor can only hope to squeeze some cash quickly out of this mildly diverting but entirely forgettable trifle from Luc Besson’s Production Company, Europa. John Travolta has a kinetic, amusing turn as an uninhibited, rule-breaking, freewheeling, blast-first-ask-questions-later special agent sent to Paris to stop a terrorist attack. Jonathan Rhys Meyers plays the fledgling, amateurish, low-level CIA operative he’s suddenly partnered with. But From Paris with Love eventually spirals into a shoot ‘em up, bang-bang, mis-matched buddy movie we’ve seen done better at least a hundred times before. Despite Travolta, this Midnight Run wannabe should be in and out of theatres with any hope for recoupment coming from non-discriminating action fans overseas and from DVD sales.

Awkwardly mixing comedy and hard-core, nonsensical action sequences, the film’s set up involves Meyers as James Reese who has a nice life with his girlfriend (Kasia Smutniak) and an American embassy job in Paris while also working as a low ranking gofer for the CIA, on the side. All hell breaks loose when he manages to get his first big assignment and is teamed with Charlie Wax (Travolta), a man who never met an Uzi he didn’t love. As the trigger-ecstatic Wax leads James on a series of harrowing chases and encounters with various international villains, James, in way over his head, soon discovers that the prey they are hunting is him, and despite the discomfort, he finds he needs Charlie to save him. It’s never quite clear exactly what these evil forces, Chinese, Pakistani etc, are up to, but does it really matter?

Director Pierre Morel, working from a sketchy screenplay by Adi Hasak and a story by Besson, certainly proved with last year’s sleeper hit, Taken that he knows his way around action sequences, but without a strong character like Liam Neeson’s at the center, From Paris with Love doesn’t give us much to root for. As a travelogue of famous locales, including one set piece at the Eiffle Tower, it’s certainly fun to watch at times and never dull but like the food in the Chinese restaurant where another shootout is set, it just doesn’t stay with you very long.

Travolta is obviously having a great time as the loose cannon Charlie Wax and he does throw off several funny lines and has all the necessary character quirks you come to expect in these movies. He’s well-paired with Meyers who has the oafish Reese down pat but doesn’t bring much originality to this rather bland guy. Smutniak is attractive but her character defies credibility as it goes along. The rest of the cast is strictly one-dimensional.

If so inclined for a breezy, violent time-waster audiences could do worse. Travolta sadly can do so much better.