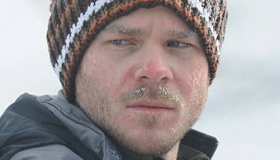 Adam Green's sparse drama about three college kids abandoned in a blistering ski lift is a chillingly real look at spur-of-the-moment survival instincts that struggles to fill its feature length running time. Genre prospects are lukewarm for a flick that blazes its own path, shunning guts and inglorious deaths (mostly) for a measured, moderately effective look at three kids staring down their own doom.

Childhood best friends Dan (Kevin Zegers) and Joe (Shawn Ashmore) have set off on a skiing adventure to get away from it all, only part of what Joe wants to get away from—Dan’s tagalong girlfriend, Parker (Emma Bell)—is along for the ride. Frustrated after a day spent encouraging her down the bunny slope, Joe goads the trio into taking one final tear down a real trail. In a rush of closing time camaraderie, they convince the lift operator to allow them to take the last bench up of the night. But human error—a force as deadly and merciless as any serial killer—strands them a bone-breaking height above the hard-packed snow. And the slopes aren't reopening for five days.

What works in Green's script is the naturalism, a new move for the gore-tastic director of Hatchet (he's now working on Hatchet 2): throughout, we know nothing more than the doomed trio. We don't know if there's a groundskeeper coming by in the morning. We don't know if the overnight forecast is fatal. We don't know whether to jump or wait. We're caught between likely death and unlikely survival. In those moments when we (and the characters) are paralyzed between bad decisions, we're as stiff with tension as an icicle.

The problem is, even though we empathize with their predicament—and it plays out realistically—the threesome is so unpractical that we're distracted by our own (better) escape routes. But then again, who doesn't think they can outsmart a foolhardy frat guy when they’re in a warm theater with a bucket of popcorn? Zegers plays a stock alpha male with attitude, yet he's redeemed as the film's bravest character. As his girlfriend and hopeful wife-to-be, the spunky Bell turns weepy and weak quick, but it's uncharitable to assume we'd be less obnoxious. Ashmore's Joe is the least-drawn character; he's clearly got a heart, but we never believe that a guy who loves his best friend would pick on his girlfriend mercilessly even when they're cozy in the ski lodge. And when their numbers are whittled down and the survivors unleash their panic on each other, the emotional digressions feel like filler for a thriller struggling to be full length. Give Green credit for not padding it with a second villain—say a bear with attitude—but there's really only enough drama here for a good sixty minute TV special.