close
Trading quirk for pathos—or so we hope 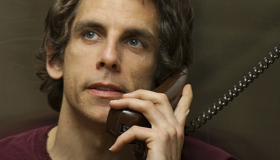 With his morose, hangdog demeanor, Ben Stiller seems perfectly cast as an angry 40 year old with a severe dose of incipient middle-aged depression. Bolstered by the likes of Greta Gerwig, Rhys Ifans and Jennifer Jason Leigh, director/writer Noah Baumbach moves the whole shebang along at a brisk pace. Although Ben Stiller’s brand of nervy comic ticks can prove irritating on occasions, here he is kept in check so that the humor and the pathos shine through.

Stiller plays Roger, an unemployed 40 year old with mental health problems who, after being released from treatment in New York, finds himself house-sitting for his brother (Chris Messina). Florence (Greta Gerwig) is an aspiring singer and also the Greenberg family’s general factotum who keeps an eye on the house in the Hollywood Hills and also on the house-sitter who has to cope with, among other contingencies, a sick dog.

The two lost souls strike up an unlikely relationship, although Roger has been trying to rekindle a friendship with Rhys Ifans’ character (many of the characters are nameless), with whom he used to play in a band. Greenberg’s also tries to reconnect with an old flame, Jennifer Jason Leigh, who also helped to devise the story with husband Baumbach.

Unable to drive, he is dependent on the redoubtable Florence to chauffeur him around. His vulnerability proves to be one of his main attractions to Florence and they hit it off in a way neither of them could have predicted. Thanks to her, Roger can suddenly see that there may well be a way out of his midlife crisis.

As you might expect from the Academy Award-nominated writer and director of The Squid and the Whale, the story packs enough wittiness, punch and pathos to sustain itself. Baumbach also uses his Los Angeles locations to authentic effect, giving the city almost as much prominence as the characters.

It could have been hopelessly overindulgent, a fear shared in advance by colleagues at the recent Berlin Film Festival where it was premiered, but by the end of it all you do care about these characters and their foibles.