close
As enigmatic as the spirit 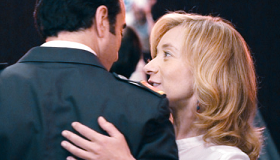 Famous as the site where St. Bernadette had her visions of the Virgin Mary and for its waters' rumored healing properties, Lourdes is a popular stop for Christian pilgrims. Austrian writer/director Jessica Hausner's Lourdes follows one such pilgrimage and one pilgrim in particular who is both hopeful and skeptical. This drama is something of a miracle itself: a film dealing with religion that is refreshingly free of dogma. Too low-key for wide audience appeal, Lourdes should pull in enough fans of character-driven stories to garner moderate box office success.

Star Sylvie Testud has an enigmatic Mona Lisa smile, and she puts it to good use playing Christine, a young woman confined to a wheelchair, her legs and arms paralyzed. She is not particularly religious and regards this and similar pilgrimages that she has made as a respite from her lonely, isolated life. She would not mind a miracle, but she does not expect one. She is socially awkward, but always friendly and more cheerful than most of the other pilgrims. Among her companions are her roommate for the duration of the trip, the unsmiling Fr. Hartl (Gilette Barbier); Maria (Léa Seydoux), her sullen, young nurse; and Cecile (Elina Löwensohn), the head nurse to whom the pilgrimage is something serious and sacred. There is also a handsome male volunteer, Kuno (Bruno Todeschini), who both Christine and Maria take a shine to.

Actors blend with real pilgrims as Hausner captures the entire spectacle of Lourdes, from its stately cathedral to the procession through the grotto to the waters to the tacky gift shops in town. There is a lot of humor, much of it black, sprinkled throughout the drama. There is also a strong psychological component in the relationships that develop within this group of strangers and in their varying attitudes toward the miraculous.

Following a single pilgrimage from beginning to end, Lourdes has no real narrative drive and no big dramatic moments, yet it is never dull. That is partly because Lourdes and its pilgrims are fascinating on their own terms. But it is also because Hausner's tale is as enigmatic as one of Christine's smiles, its meaning open to interpretation. Whatever her intentions, what she delivers is a graceful, elegant film.