on February 15, 2010 by Cathleen Rountree
Print 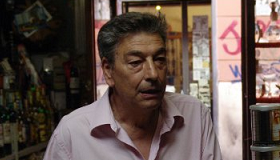 Gianni di Gregorio, in a somewhat autobiographical role, portrays the unemployed, middle-aged only son and sole caretaker of an aged, but regal mother. The two live together in Rome. Through a series of circumstances the bachelor finds his nanny-duties increased four-fold. The crux—and fun—of the story revolves around how the four octogenarian women and their put-upon caregiver spend a day in cramped quarters becoming acquainted with—and learning to tolerate—each other’s quirks and idiosyncrasies. It may be difficult for the youth-obsessed American culture to appreciate the quiet joys rendered in this Italian charmer. But, given the increasing dominion of the Baby-Boomer Generation—hungry for life-affirming images of old age—Mid-August Lunch could prove a sleeper-in-the-making.

It’s hard to imagine two more antithetical films than the thoroughly delightful, soul-infused Mid-August Lunch and Matteo Garrone's Gomorrah, the unsentimental, grimly exciting exposé of organized crime in and around Naples. What they do share, however, is Gianni di Gregorio, the first-time director (writer and actor) of Mid-August, who acted as screenwriter for Gomorrah, and Garrone, who produced Mid-August.

In the opening scene of Mid-August, the camera lens lovingly caresses the wrinkled, bone-thin, liver-spotted arm of one of the primary characters, who we learn is Gianni’s mother. We then see close-ups of her lined and weathered face (almost like a craggy landscape), beautiful in its own way—untouched by cosmetic surgery. He sits beside her bed, reading aloud The Three Musketeers. When the screen suddenly goes dark we think it must be due to a power outage in their home, but it turns out it’s the middle of the night and Gianni, sound asleep, has been roused by his restless and demanding mother.

Poor, pitiful Gianni, we think. Lassoed to his mother’s side, his only escape is the occasional glass of wine he shares with his homeless friend on a neighborhood side street. But he seems resolved to his life and even finds subtle pleasures in his marketing and cooking duties.

But, the day before the August 15th Festival of Ferragosto (the Assumption of the Virgin Mary) is celebrated, the apartment manager, aware of both Gianni’s captivity and his unpaid utility bills, makes him an offer he can’t refuse: he will erase the debt from the books, if Gianni will care for his mother. All seems fine until the manager shows up with his mother and his aunt. Also behind on his and his mama’s doctor bills, Gianni agrees to house his physician’s mother as well. Now he has four nanas to contend with.

Although at first he seems a bit haggard, he easily adjusts to—and even indulges—his charges, seeing to their particular needs. This is an Italian movie, after all, and appropriately mouthwatering scenes of food preparation—especially the lasagna—and dining ignite our senses of smell, taste and imagination as much as they satiate and emotionally bond the ladies around the dining room table.

In the film’s penultimate scene, Gianni eavesdrops on the women as they read each other’s palms and reminisce about their youthful days and lost loves. A once quiet, lonely apartment dances with the laughter of newly forged friendships. This may be a small gem of a film but it tackles a vast, too often ignored, subject. Mid-August Lunchportrays and embraces the theme of the inevitable—and natural—passage of time with grace, dignity and humor.