on February 15, 2010 by Barbara Goslowski
Print 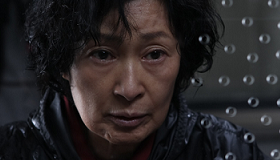 Korean writer/director Bong Joon-ho affirms his place among the art cinema masters with his latest endeavour, Mother. Denied a coveted spot in competition at Cannes, this film will still rank among the best of the year. Bong’s stylistic embellishment of the simple tale of a mother who will do anything to protect her son is breathtaking. His genre-jumbling practice takes us beyond established boundaries. And the best part is that he has some fun along the way. Following the successes of his recent films, The Host (2006) and Memories of Murder (2003), Bong’s name alone will draw crowds. Word of mouth will follow. This film is as accessible as art films get.

In a small village, the “mother” of this film (Kim Hye-ja), a widow who works as a traditional healer, clings to her only son, Do-joon (Won Bin), a young man with a developmental disability. Do-joon is not only slow and awkward but also naive and impressionable. He simply can’t function well in the most commonplace situations. His mother is, to say the least, doting and over-protective.

Jin-tae (Jin Gu), a local thug, takes Do-joon under his wing and tries to guide him through life in this peaceful village. They are an unlikely pair, the cynic and the innocent, but are perfectly suited for this film.

The village is a seemingly nondescript setting but a scratch at the surface reveals irreconcilable realities at work. This is a world where dichotomies collide and expectations collapse. Bong skillfully interlaces such disparate genre rudiments as suspense, comedy, action and sentimentality to completely suspend our disbelief. Now he has us where he wants us—now he can proceed even further.

One night, drinking alone when Jin-tae fails to show, Do-joon is ejected into the street. Drunk and wandering home more precariously than usual he stumbles across the lovely Ah-jung. He scares her and she runs away. When she is found murdered the next morning, Do-joon is arrested. In his mother’s desperation to help him we watch just how far limits and expectations can be pushed.

Bong cast a beloved and popular Korean actor in this role; she has spent 30 years portraying the traditional devoted mother on the small screen. Kim Hye-ja not only accepts the challenge of subverting this role and her career long service to maintaining it but she functions as an accessory. As the story’s noirish elements merge into thriller conventions and then psychological horror, the perimeters of Kim’s portrayal swell.

Thanks to the coherent weave of seemingly incongruent elements that both Bong and Kim accomplish, there is no such thing as unbelievable in this film.