close
Before the name “John Lennon” meant anything particular 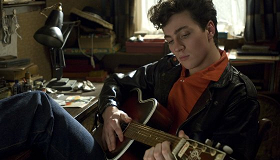 Sam Taylor Wood's biopic of 17 year old John Lennon opens with the first chord of "A Hard's Days Night”—a one second blast of reverb that, like the film itself, is recognizable but stops just shy of infringement. This is the life story of the Beatles' most complicated genius (according to himself), remixed for added drama. The Weinsteins have thrown their weight behind the flick's mass appeal, and while it's sure to be picked apart by Lennon devotees—say, those who have penned Wikipedia bios for his mom, aunt and uncle that run nearly as long as the file on Liverpool—indie box office sales will sound mighty sweet.

Like Todd Haynes' I'm Not There—which never once came out and said the name “Bob Dylan”—Nowhere Boy bites its tongue and refuses to say “The Beatles.” A scene where John (Aaron Johnson) tells his guardian and Aunt, Mimi (Kristin Scott Thomas), he and The Quarrymen have just changed their name is a tease. She's not interested in hearing about the band, and she never would be. (Which makes you wonder just what the two talked about on their legendary once-a-week phone chats that continued until his death.) Mimi prefers Tchaikovsky, schoolwork and nagging John to wear his glasses, already in their signature shape, though for now he'd rather shove them in his pocket. John's mother, Julia (Anne-Marie Duff), was the rock ‘n’ roll fan, and Matt Greenhalgh's screenplay suggests he only picked up a guitar to get closer to her. Julia was a winsome heartbreaker forced to give up custody of John when he was five. (Mimi kept calling social services on the single mom for having her son share a bed with her and her new boyfriend.)

As Duff plays her, Julia's swollen with love and optimism, like a balloon that's easily burst; when drained she falls into depression. And to shelter their daughters, Jacqui and Julia (who would write the memoir that inspired the film), common law husband Bobby (David Morrissey) wants to keep distance between her and her son, leaving young Lennon without a warm mother figure but with a need to convince himself that he's cocksure enough not to need one. Wood's portrait-of-the-artist-as-a-son fudges the facts but finds emotional truth. Johnson is wholly credible as the future rock king: handsome, smart, brash, impulsive, overconfident and angry, he makes everything we'd later learn about Lennon feel inevitable. When he first blows off 15 year old Paul McCartney with a masturbation joke before reluctantly bowing down to his guitar skills, the dynamics that would make the band conquer then implode are already sparking. By the end of the film, Lennon's learned to share the mic with Paul and George (Sam Bell), but he can't help strutting like he's the star of the show, even though his own mom claps louder for Paul's solos. Paul and George might have the skill, but John earned the swagger. And though this biopic is as tidy as a three minute pop song, when we see him look back one last time as he leaves Aunt Mimi's for Hamburg and all that would come after, the music god is just a little more human.