close
Played in the key of the 1990s prestige indie, and just as in tune. 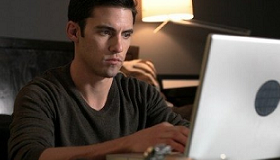 Proof that compelling and challenging indie fare can still be made on a shoestring (without looking like it was made on a shoestring), Order of Chaos applies a bracing style and a solid sense of mood to a fairly well-worn scenario to deliver a surprisingly effective, low-key psychological thriller. Like most such pictures, popularity will accrue like a slow burn, segueing from a quick theatrical release to steady sales on DVD.

Rhus Coiro plays John, a seemingly average, modestly uptight tax attorney working his way up in the firm headed by the no-nonsense Miss Craig (Mimi Rogers). That’s until a hotshot new co-worker named Rick (Milo Ventimiglia) bullies and charms John into joining his fratboy ways, the repeated partying in the evenings soon taking a toll on John’s relationship with his fiancée, Jennifer (Samantha Mathis), and, eventually, on his job. It seems fairly clear that Rick is more than he appears and that he’s just setting John up for a fall—at least, that’s how films of this type, which all follow a kind of allegorical Garden of Eden trajectory, are supposed to transpire. But writer/director Vince Vieluf wisely pushes the film askew of where similar efforts have previously gone, enabling his actors—Coiro in particular—to show broader range than might typically be possible in a film of this scale.

Where thrillers are concerned, the milquetoast-to-obsessive-lunatic transformation is always measured, rather unfairly, against Jimmy Stewart’s performance in Vertigo. There’s no question that Vieluf means for Coiro to follow a similar trajectory here, but with enough unexpected deviations from the formula, Coiro is ultimately able to make the performance very much his own.

For a film budgeted at a reported $1 million, Order of Chaos is exceptionally accomplished and well acted. Some excessively tricked-up editing and uneven audio occasionally betray its limitations, but they are small indentations on an otherwise very slick veneer.