close
A surprised member of a lineage of cinematic high pedigree 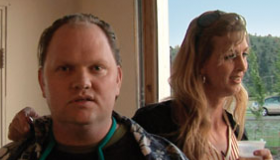 Prodigal Sons is a documentary about a sibling rivalry that persists through some unusual identity changes. Marc, the adopted son, discovers that he is the grandson of Orson Welles and Rita Hayworth. His high-achieving brother becomes a transgender woman, the film’s director Kimberly Reed. The unexpected directions in their family dynamics and unflinching scenes of the volatile Marc keep Prodigal Sons absorbing. The emotional intensity combined with the Welles/Hayworth connection should draw attention to help this documentary stand out among independent films. The film has received several film festival awards, including the Best of Fest Audience Award at Palm Springs, indication of audience potential.

The brothers grew up in 1970s in the Big Sky Country of Montana. Reed said, “it seemed anything can happen, and anything did.” Marc was adopted by Carol and Loren McKerrow as an infant because they thought they could not have children. Shortly after the adoption, Paul was born to the McKerrows, followed a year later by Todd. Reed said the home movies have the look of a fairytale childhood but as the film convincingly shows, “appearances are deceiving.”

Marc was held back a year in pre-school and ended up being in the same grade through high school with his popular brother Paul, who was co-captain of the football team and voted most likely to succeed. From the common school years, a life-long competition developed for Marc. Marc has long played the piano, even though he does not read music. He had an accident that left him with brain damage, causing personality changes.

Both brothers’ lives take unconventional turns, making Prodigal Sons continually intriguing. Paul moved away after high school graduation and transitioned genders into Kimberly Reed, developing a new identity. Both Kim and Marc return to town for their twentieth high school reunion after being estranged for over a decade. Unlike Kim, Marc remains caught up in their past.

Investigating his ancestry, Marc finds out that he is the son of the daughter of Welles and Hayworth. His birth mother dies before he can meet her. Welles’ companion and collaboratorm Oja Kodar, invites Marc, his wife and daughter to meet her in Croatia. Kim joins them. For Marc, it is an idyllic trip where Kim has never seen him as happy. He is treated with importance while Kim is the one becoming uneasy. Oja compares Marc’s appearance to Welles and tells Marc some family information that could explain his affinity with the piano.

Back home, old patterns and rivalries resume and Marc’s mood swings become violent. The police are called. Reed said she started making a film about her adopted brother’s new lineage, but that Marc caused her to confront her own buried past. Prodigal Sons is her notable first feature length documentary. The film is skillfully edited by Reed and Shannon Kennedy to build tension as reunions are broken up by Marc’s aggressive behaviors. The camera brings a vivid intimacy to document complicated relationships that remain even after Kim has tried to radically reinvent her life.