close
The underbelly of Noir, filleted and deep-fried 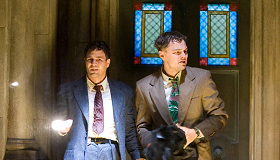 Martin Scorsese’s post-Oscar win picture is a neo-noir that puts the fundamentals of post-war psychology to literal use. Our protagonist (Leonardo DiCaprio) is a detective seeking a missing patient in an asylum for the criminally insane. This star-studded production seems a more commercial venture than the majority of the director’s past work, and as a period piece set in the mid 1950s, a time of major shifts in the treatment and diagnosis of mental illness, the film situates itself in the realities of the era’s cinema—major details and plot points are asserted both visually and via dialogue, telegraphed and repeated. It will likely be a middle ground competitor in Scorsese’s body of work, both financially and in terms of its importance, but numbers will not suffer. Not with this cast.

U.S. Marshall Teddy Daniels (DiCaprio) overworks to escape the trauma of his wife’s death (Michelle Williams). A WWII veteran, he flashes back to his part in the liberation of Dachau, a reminder of the tragedies that made the men of noir shiver in the face of their femme-fatale counterparts. What’s poetic and vital about Teddy’s recollections is their flexibility and tendency to change. His history is a landscape littered with reveals, ripe for the nagging revisionism imposed on him by his dreams, where war morphs to murder and characters commonly trade roles. Teddy is searching for Rachel Solondo (Emily Mortimer), a war-widow/patient who killed her three children and still thinks she’s at home in the Berkshires. He goes with his new partner, Chuck (an alternately cautious and suave Mark Ruffalo), who helps him interrogate patients and keeps him out of trouble. The mystery under the mystery is flecked with historical cues: HUAC (House on Un-American Activities Committee), Manchurian Candidate-style government control and third generation Nazi torture/testing. But the drama is all psychology, and everything rests on this Alcatraz manned with seemingly benevolent doctors and potentially malevolent agendas. Law, a masculine and codified comfort to our protagonist, becomes the albatross around his neck. For Teddy, law can’t trump guilt—and, for Scorsese, fact can’t trump feeling. That the island is draped in vapors and ghosts only adds another deceptive level to the proceedings. What is film if not specter first and a morass of meanings far later.

We see most of Shutter Island during a hurricane. The lightning is an appropriately brazen reminder of the pun built into the title (shutter with fear, camera shutter). A place where people and representation can’t be trusted, the island poses its own geographic threat: only reachable by institute controlled ferry, the island’s cliffside is menacing, the perfect metaphor for man against nature, and in a place where the definitions of “man” (as opposed to monster) and “nature” (as opposed to nurture) are stridently up for grabs. Scorsese hits the genre tendencies aggressively here, more than any other Scorsese film I can think of, and enters into only one or two moments that defy the norms: one moment in particular, an intimate memory of Teddy’s wife giving him a tie, is shown in sweet but abstract close ups and cut in a way reminiscent of Stan Brakhage’s Window Water Baby Moving but in color (and without live birth—a possible inside reference to later events).

Shutter Island is a bear hug to cinema while it’s also an occasionally tart valentine to genre. Its affections aren’t ironic but isn’t there something ironic about a love letter to film that takes place in an asylum? Scorsese isn’t my favorite but he is a modern master and was only awarded that Oscar in 2007, after decades of diligent service. Not to psychoanalyze but, hasn’t the man earned license for just a little frustration? If that is an element in the film and not just the musing of a critic, this is a pretty elegant form of catharsis. No therapist required—or, at least, none he’s showing us.