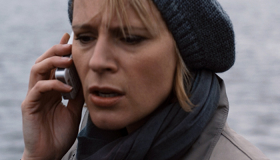 Irish playwright Conor McPherson’s first film in six years is a charming oddity, a character-driven drama with just enough fringe genre elements to both enhance and distract, though ultimately hewing closer to the former to make the latter only a minor annoyance. Tonal peculiarities aside, the film remains an effective showcase for both director and cast, particularly the wonderful and always underrated Ciarán Hinds whose performance earned him a Best Actor award at the 2009 Tribeca Film Festival. Magnolia releases of this type, however, are typically brief, so fans of “hÉireann scannán” on the big screen should plan an opening week pilgrimage lest the film’s “national” rollout in April dovetail quickly into cable and DVD longevity.

Adapted by McPherson and Billy Roche from Roche’s Tales from Rainwater Pond, The Eclipse tells a loose and leisurely tale of three individuals beginning with a widower and frustrated writer-turned-teacher named Michael Farr (Hinds). Far’s volunteer work for a local literary festival lands him chauffeur duty for two attending authors—the lovely Lena Morelle (Iben Hjejle) and the unbearably pompous Nicholas Holden (Aiden Quinn). Morelle, it turns out, has been invited by Holden in hopes of resuming their brief affair from the year before, but Morelle has long since moved on, this time forging a connection with Farr over a series of strange, supernatural encounters not unlike those in her books. Whether Farr is just deeply aggrieved and troubled, or the victim of a genuine haunting is a question which the film, to its credit, never really answers—the metaphysical mystery is meant to prompt the audience to richer thematic considerations related to the characters’ otherwise mundane relationships. Unfortunately, McPherson can’t resist exploiting the supernatural intrusions for the sake of cheap shock effect. While there are only a handful of such instances, they come off as cheap tricks sorely out of place in an otherwise mature and meditative character piece.

My caviling, as such, ought not detract from the picture’s more polished moments. Hinds has rarely been better, conveying Farr’s mournful fatigue in both demeanor and comportment. Hjejle, too, resurrects the charm with which American audiences first discovered her in High Fidelity, quite possibly the last time most stateside viewers will have seen her. Quinn, ever reliable as the heavy, handles the chores laudably here—giving an otherwise stock character some uncharacteristic depth and emotional momentum.

Ironically, The Eclipse is at its best when plot and genre considerations have been cast aside—Hinds’ and Hjejle’s scenes together are warm and embracing, almost beguiling in their honesty and intimacy. That they must necessarily end for the plot to move forward almost seems a cruel obligation, though at just 88 minutes the film smartly avoids overstaying any emotion, either positive or negative.

That a demure effort of this type from a tiny European industry like Ireland’s can still get American distribution is a promising sign, to be sure—even if Magnolia doesn’t back its films with the kind of muscle once associated with the old Miramax, their courage in acquiring and distributing the picture at all warrants praise and support. Should fans, in turn, return the favor—the dwindling landscape for specialty pictures might finally begin to stabilize. That would be good, even great, news for everyone.