close
Polanski’s Ghost is haunted in more ways than one 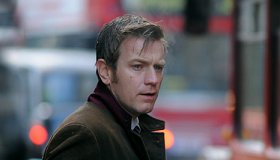 The Ghost Writer is a haunted film, though it’s not a supernatural one. The latest from Roman Polanski, this disciplined, proficient thriller tells the story of a hack memoir doctor (Ewan McGregor, in excellent form) hired to finish the autobiography of a Tony Blair-like former Prime Minister named Lang (Pierce Brosnan) when the previous “ghost” turns up dead on a beach near the PM’s borrowed American villa. The predecessor’s death is ruled accidental, but the further the new “ghost” slips into the vacated role of Lang’s literary amanuensis, the more doubtful he grows about the official version of events.

It’s all classical genre stuff, and though the film will probably earn a lot of comparisons to Hitchcock because of Polanski’s clean and effortless visual style and his consistent use of point of view shots to generate suspense, Ghost Writer is really much more in the spirit of the many movies based on novels by John le Carré —a political drama of ideas, rather than an action-driven narrative punctuated by carefully measured doses of violence. If it is possible to watch this work as a movie rather than using it as a referendum on its maker’s guilt or innocence, the audience that craves mature, sophisticated and grown-up entertainment will find much to admire here.

But Ghost Writer is also and will forever be the movie Polanski was working on when the messy legal problems he thought he’d left behind in America 32 years ago caught up with him as he crossed the border into Switzerland last September. His Swiss captors, who arrested him as a fugitive from justice, appear poised to turn Polanski over to California to stand trial for statutory rape; meanwhile, Polanski languishes under house arrest in his Swiss villa, quite literally a prisoner of his past.

It will be hard for most critics and filmgoers to separate real life drama from the one inside this movie, especially since there is every possibility the 76 year old Polanski will stand trial in America, and may never make another film as a result. There are significant parallels between Polanski’s life and this latest example of his art, including a deliciously ironic one Polanski had to be aware of: when scandal erupts, with Lang accused (as Tony Blair has been) of handing British citizens over to be tortured by the U.S, it’s suggested that Lang may have to live in exile within the United States because it doesn’t recognize the jurisdiction of the International Criminal Court. There’s not a lot of love for America in this movie, so you can almost feel Polanski’s glee at sentencing one of his characters to what he surely feels is an even less desirable fugitive status than his own.

But Ghost Writer is no autobiographical screed; the great director is in his commerce mode, not his arthouse one, and has made a film more akin to Frantic and The Ninth Gate than it is to those soulful post-American masterpieces Tess and The Pianist. As he has so fitfully in the past, Polanski is attempting to wed his undeniable skills as a master of unsettling moods to a commercially viable project, as the current international film market understands the term. This has always been a tricky process for him; unlike Hitchcock—a director with an equally neurotic worldview, but one who took such perverse delight in plot twists and the kinetic possibilities of moviemaking that he made the audience love him for it—Polanski is too restless an artist to develop a “brand” capable of consistently luring the public to his later works.

Ghost Writer is one of Polanski’s more successful sallies in this direction, because in the detritus of recent political events he’s found an amorality that trumps his own. Every relationship in Ghost Writer is a marriage of convenience. The apolitical “ghost” takes his job for the cash. Lang’s loyal secretary (a restrained Kim Cattrall) is clearly sleeping with the boss. Lang’s wife, Ruth (Olivia Williams, a study in controlled ferocity), feels her reign as the power behind her insipid husband’s career slipping, and grasps for “the ghost” with both hands as an act of revenge.

Within this framework of vicious and self-interested women and men, Polanski sketches convincing asides on the brutal think-tank politics of the post 9/11 era, the crass commerciality of contemporary publishing and the rapacious invasiveness of the 24 hour news cycle. The eruption of media interest in Lang as the scandal roils around him represents some of the most vivid filmmaking in Ghost Writer, and it’s hard not to think that Polanski—a veteran not only of his own recent scandals but of the media circus surrounding the Manson Family killings of the late ’60s—is drawing on his own experiences, and a lingering sense of outrage and malaise.

It would be tidy to report that Ghost Writer is not only a terse chiller, made with the easy mastery of a cinematic classicist, but also a fitting capstone to Polanki’s career—since such it may prove to be. It isn’t of course—it can’t be. It was made by a director who simply could not know what was going to happen to him. In an odd way though watching what may be the last ticks of the clock on one of the most vivid and disturbing careers in cinema history is its own kind of monument. For Polanski’s vision has always been more than large enough to encompass the bitter twists time throws at us, and the hungry claims made on each life by the grinning specters of every unburied past.