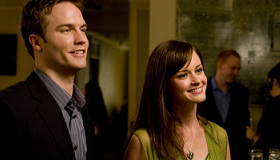 Twentysomethings working hard on Wall Street and trying to manage relationships in the tricky contemporary world of dating is the basic topic of this romantic drama that toplines Gilmore Girl Alexis Bledel as a woman whose desire to have it all personally and professionally leads her into a complicated quest for true love with a “good guy.” Attractive cast is a plus but lack of big star names and a fresh hook should mean limited theatrical returns for this modest and enjoyable 2009 Tribeca Film Fest pickup. Bledel’s fan base is more likely to wait for the DVD.

Beth (Bledel) is an urban conservationist living in Manhattan who hooks up with Tommy (Scott Porter), a Wall Street whiz who is as good with the ladies as he is with his clients. Andrew McCarthy plays his demanding boss Cash (!) in the hard-driving firm for which he works. When one of their top earners suddenly quits, Tommy convinces Cash to let unassuming but nice sales rep Daniel (Bryan Greenberg) take over—even though Danny is far too reserved to naturally fit in with the rather coarse woman-chasing clients the firm attracts. As Beth feels increasingly ignored by Tommy, she starts to spend time with sensitive Danny, even inviting him to join her all-girl weekly book club. Complications arise when she learns Tom has been tomcatting around with several other women, meanwhile Tommy suspects she is more than platonic with Danny. You get the picture.

Debuting writer/director Julio DePietro bookends this story with Tommy showing up on Beth’s doorstep desperately asking for cash. She says she feels sorry for him before shutting the door in his face. Film then flashes back several weeks to detail all that leads to the break-up, although the device doesn’t really seem necessary in context. A former investment house employee himself, DePietro seems undecided which storyline—the Wall Street firm’s hustlings (think Boiler Room) or the romantic triangle—he likes best, or which of the male leads to focus on: Tommy’s aggressive go-getter or Danny’s sweet shy guy. Although this was all written before Wall Street’s meltdown, recent economic events don’t really affect the way it all plays out on screen and indeed may even help.

The cast could not be better. Bledel is believable as a young professional caught in the crossroads of career and choices in love and life. Porter is full of hubris and sexual swagger, perfectly capturing the kind of young hotshot you would find in this world. Greenberg is likeable and appealing although, with his character’s military background, you might expect he wouldn’t come off as such a wuss. Supporting roles by friends Anna Chlumsky, Aaron Yoo and Colin Egglesfield are aces.