close
Saucy, culty foreign and all kinds of clever

The Good, the Bad, the Weird 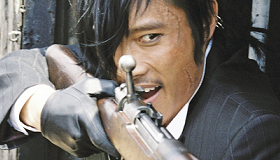 The Good, the Bad and the Weird has an unusual classification: a Korean "Western" set in the steppes of Manchuria in the 1930s. Director/co-writer Ji-woon Kim said that the familiar clichés of the Western never cease to captivate him. He has reassembled these conventions into a fresh international mix. At a cost of over $17 million, this film is the most expensive Korean production to date. The entertaining non-stop action has the potential to give the film wide cross-over appeal and cult status.

Onboard a train menaced by brigands passing through the vast empty plains, three determined men fight for possession of a treasure map—bounty hunter Do-wan (Woo-sung Jung), bandit leader Chang-yi (Byung-hun Lee) and Tae-goo (Kang-ho Song, The Host) found the map while robbing the train. Kim has said that none of these characters represents just one of the qualities in the title, as each man changes according to the situation. The leads are played by three of Korea's top actors.

During the period represented in the film, Manchuria, part of China, was occupied by Japan, as was Korea. The story reflects Kim's description of the period as a time of anarchy and chaos. The Japanese Army (that had originally lost the map) fights to regain it for the potential treasure that could finance its war of domination. A motley multinational bandit gang also joins in fierce pursuit on horses, camels and motorcycles. Kim's sweeping camera movement and booming soundtrack give an epic scope to the film. The Manchurian landscape resembles the American West, but enlivened by elaborately staged skirmishes, exotic details and vibrant colors. Even the stars performed their own stunts as when the men jump into each other's moving vehicles. The over-the-top confrontations bring a spirited humor as characters continually risk death for control of the map and the riches it could lead them to. Bullets fly by constantly. Swords are other weapons of choice. A finger is chopped off and someone talks about never having seen such gruesome deaths.

Besides obvious references to Sergio Leone, Kim adds in some clever allusions to varied films like The Magnificent Seven, Apocalypse Now, and Giant. Kim's cinematic vigor never flags but his film moves too quickly for much character development. Chang-yi, determined to remain the top gun of the East, and the coolly confident Do-wan remain charismatic archetypes. Song's performance gives Tae-goo a quirkiness that makes his character by far the most interesting and most like the Weird. He prefers a motorcycle to the usual horse. Tae-goo is a far cry from Song's introverted role in Secret Sunshine, demonstrating his wide acting range. Everything builds to a unique final standoff between all three leading characters to find out who is the ultimate winner.