close
Intense in spots and utterly delightful throughout

The Secret of Kells 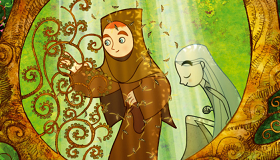 An Irish abbey's 12 year old novice risks the wrath of his uncle, the abbot, and danger in an enchanted forest, all for the sake of an illuminated manuscript in The Secret of Kells, the dark horse nominee in this year's animated feature Oscar race. The stealth entry that beat out more high profile titles, such as Cloudy with a Chance of Meatballs and Ponyo for the coveted fifth spot previewed ahead of its March 19 U.S. release and was seen recently at San Francisco's Mostly British Film Festival. A riff on medieval history, religion and Celtic mythology, the subject matter may be a tad obscure for American audiences, but the exquisite art and fairytale ambience will win over animation fans and children alike. With the Academy Award nomination considerably raising its profile, the Secret is out, and careful promotion could translate into a modest box office hit.

With Vikings on the march, bringing with them death and destruction, Abbot Cellach (Brendan Gleeson) has dedicated everyone at the abbey at Kells, including his orphaned nephew Brendan (Evan McGuire), to building walls to keep out the invaders. That routine changes for Brendan when Brother Aidan (Mick Lally), a master illuminator, arrives from the Scottish island of Iona and takes up residency in the abbey's scriptorium. Fascinated by Aidan's life work, an intricately illustrated book of the gospels, Brendan defies his uncle, slipping past the wall with Aidan's little white cat, Pangur Ban, and into the forest to find the berries Aidan needs to manufacture ink. Monsters and black magic await him in the woods, but so does Aisling (Christen Mooney), a white wolf-fairy, who serves as his protector. Back at the abbey, Brendan discovers his own talent for illumination and dedicates himself to the craft despite his uncle's disapproval and the advancing Viking hordes.

The illustrations in The Secret of Kells are mostly handmade and almost defiantly 2D. The human characters and the cat have the aspect of cartoon characters of the 1960s or ’70s about them. It is the imagery that surrounds them that makes the film so very special. Taking inspiration from images in the real Book of Kells (a Celtic, illustrated version of the first four books of the New Testament), the movie uses the rich colors and vibrant imagery of an illuminated manuscript in many of its scenes. Other images are more ominous. The Vikings, for example, are monstrous in form, as frightening to look at as Abbot Cellach imagines. There are backgrounds, such as the wall, that look completely static, but look closely and often there is action independent of the main drama in the foreground of the screen.

Parents with small or sensitive children should be warned, there are some frightening scenes in The Secret of Kells, but there is also a strong air of enchantment, a hero that kids can identify with in Brendan and a fluffy little sidekick tots will adore in Pangur Ban. That Oscar nomination is not such a surprise, after all: The movie is a pure delight.