on February 12, 2010 by Cathleen Rountree
Print 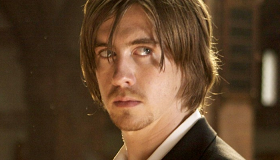 This riveting, stylish yet substantial Norwegian film from the gifted director Erik Poppe comprises elements of existential psychological drama, cinema of redemption and nerve-racking suspense story. Troubled Water (which roughly translates as “the invisible ones”) recalls both the fine Boy A and the underwhelming The Changeling. Recently released from prison after serving eight years for murdering a young boy (a crime he continues to deny), the late-20 something Jan Thomas attempts to rebuild his life back in Oslo, where an Episcopalian Church provides him with a job as an organist, an apartment and, possibly, the love of Anna, the pastor. The film deals with a tragic topic, however its compelling storyline of crime and punishment, forgiveness and redemption are evocatively drawn. Skilled direction, limpid cinematography and near-flawless acting should garner a sturdy run in arthouses and an ample ancillary return.

Troubled Water is the third film in Poppe’s trilogy, which started with Schpaaa, the story about a gang of criminal boys, and continued with Hawaii. Oslo, which was chosen as Norway’s contribution to the 2004 Academy Awards. The film opens on Jan Thomas (Pål Sverre Valheim Hagen, a dead-ringer for Ryan Gosling) during his last day in prison. The other inmates nearly drown him in a water-filled kitchen sink and do their best to render the musician’s right hand useless. Once out, through luck and talent, he lands the church organist position and begins to reinvent his life. Soon it becomes clear that the kindness of the pastor, Anna (Ellen Dorrit Petersen), is not solely altruistic. Although she has no idea of his history she shares with Jan Thomas the story of her plight as a single mother, who, after becoming pregnant and making the decision to raise the child on her own, was rejected by her family and abandoned by her boyfriend. Anna makes it clear that she hopes to meet a man with whom to share her life—and that man may be Jan Thomas. He attempts to reveal his past to her, but then fear and perhaps common sense change his mind. Adding intrigue, her child, Jens, eerily resembles and is now about the age the murdered child would have been, had he lived.

The narrative enters Rashamon territory when Agnes (an astonishing Trine Dyrholm), the murdered child’s mother, recognizes Jan Thomas and begins stalking him. Now the mother to two adopted Asian daughters, Agnes and her husband, Jon, have clearly worked hard to heal their lives. But the reappearance of the convicted murderer of her child completely unhinges her. Up until now we’ve been privy only to Jan Thomas’ side of the story. But the exact same action unfurls from Agnes’ POV, with the added pulsating tension of a thriller. When she “kidnaps” Anna’s son, we’re unsure if she’s finally snapped or . . .

Jan Thomas is no Raskolnikov. The original kidnapping of Agnes’ child had been the act of a lost youth, not an evil or delusional predator. (In the story’s sole loose thread we never learn his motivation and purpose for the kidnapping, undertaken with an equally directionless friend.) Troubled Water observes the inevitable merging fates of two destroyed lives with compassion and without judgment, while posing the question: Do we ever stop paying for our sins?